RyanairDontCare Campaign need help from Crew at Ryanair please.The questions below are wanted by a journalist....

1. Do Cabin Crew get commission on calender sales?
2. Are there examples of cabin crew being disciplined, fired even, for not selling enough calenders?
3. Are the "models" freely volunteers or are they coerced into posing?
4. It strikes me that cabin crew selling calendars at 14 Euro a pop are perhaps jeopardising cabin crews own income because pax have only so much to spend on board. Can it mean that a cabin crew could otherwise fail to meet their "spend" while calenders are being sold?
5. Any other stories about calenders?

John said
Thank you in advance for your help.Please post comments and they can be  Anonymous. 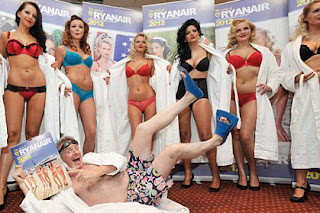 Posted by Europe's No 1 Anti Ryanair Campaigner John Foley.... at Saturday, November 05, 2011 No comments: Links to this post

Any Ryanair Cabin Crew uniform not being used by present Cabin Crew or Terminated Probationary Ryanair Cabin Crew Male or Female are needed for a protest planned against Ryanair Europe's Greatest Exploiters of Young People.
Either given or loaned to RyanairDontCare Campaign....Please get involved in fighting Ryanair scammers....

John said,
We at RyanairDontCare Campaign have some full Ryanair Cabin Crew uniforms but we need more to generate a bigger impact for our Protest...
Thank you.

RYANAIR OPEN MANCHESTER No 45 BASE 3rd NOVEMBER 2011 TO EXPLOIT EVEN MORE YOUNG PEOPLE AS PROBATIONARY CABIN CREW. RYANAIRDONTCARE CAMPAIGN WERE THERE ALSO..TERMINATION AT MANCHESTER WILL BE HIGH...

Ryanair Europe's Greatest Training Robbers of young people must be held accountable.RECRUITMENT for TERMINATION,
Michael O'Leary and David Bonderman are guilty of so much.
Today O'Leary the exploiter at Ryanair opened Manchester as base 45.RyanairDontCare Campaign were at terminal 2 also.Armed police approached me after 2 hours sitting in departures and asked me why i was there.These Manchester airport police were very professional in dealing with my peaceful protest and stated the airport could not let me protest inside the terminal building,i asked could i ask O'Leary 3 important questions instead to which they said no.I was allowed to stand outside terminal 2 departures with my protest banner as long as i did not enter the terminal building, i am not going to argue with armed police who do a great job protecting airports.
I question i wanted to ask O'leary will be posted soon as i am on the way to court in Liverpool over the John Lennon Airport Protest.

John said,
Just a shame i did not get a chance to confront O'Leary.There is always a NEXT time.
I did get talking to a Ryanair contracted Cabin Crew who told me it is worse than what i say on the Blog and he was very happy to meet the author of the RyanairDontCare Campaign's Blog.
Nice to know present cabin crew ''in person' support RyanairDontCare Campaign.

3 Simple Questions i wanted to ask O'Leary on 3rd November 2011 at Manchester Airport below.

1, Has a training fee of 3000 Euro to become cabin crew any reflection on Termination levels of Probationary Cabin Crew at Ryanair ''Michael'.

2,Probationary Ryanair Cabin Crews hourly rate of pay from Ryanair to so called agent Crewlink Ireland Ltd and Workforce International Ltd, do you, Mr David Bonderman or any Ryanair company receive any of this payment.

3, Are you aware ''Michael'' of Suicide or attempted Suicide levels of Ryanair Pilots or Probationary or Contracted Ryanair Cabin Crew....
Posted by Europe's No 1 Anti Ryanair Campaigner John Foley.... at Wednesday, November 02, 2011 2 comments: Links to this post

RYANAIR'S CABIN CREW CHARITY CALENDAR 2012 TO GO TO www.debaireland.org....RYANAIR ARE NOT CHARITABLE BUT EXPLOITERS.

Firstly i would like to congratulate Debra for all the hard work and support given to families and their children with Epidermolysis Bullosa.
My name is John Foley founder of Ryanairdontcare Campaign which deals with the exploitation of 18 to 24 year old students wishing to become cabin crew at Ryanair.
Ryanairdontcare Campaign started 3 years ago after Ryanair Recruitment Scammed my 18 year old daughter Sarah.After resurch and contact by many Terminated young students, a pattern started to emerged.

My reason for contacting you today is regarding the 2012 Ryanair charity calendar which will raise up to €100,000   for Debra which is a charity and may i say doing a great job.We at Ryanairdontcare Campaign belive that any unworthy charity payment from Ryanair would not be right for your charity.

This email and any reply will be posted on our blog.
Thank you for your time.

John Said,
I have place DEBRA website here as they do a great job and would hope they might look at the bigger picture with Ryanair, recruitment of Probationary Cabin Crew...
http://www.debaireland.org/
Posted by Europe's No 1 Anti Ryanair Campaigner John Foley.... at Wednesday, November 02, 2011 No comments: Links to this post

A Boeing 767  made a dramatic emergency landing in Poland today.See article below.
http://edition.cnn.com/2011/11/01/world/europe/poland-plane/?hpt=tr_c2

This emergency landing must have been very frightening for all passengers on board but let,s not forget the professionalism of cabin crew and pilots on board this flight who landed this aircraft safely.Congratulations for this amazing landing...
Ryanair,s Michael O'Leary and David Bonderman do not care about crew on board Ryanair aircraft,Emergency landing or not these serial scammers think PROFIT first...
Posted by Europe's No 1 Anti Ryanair Campaigner John Foley.... at Tuesday, November 01, 2011 No comments: Links to this post

A peaceful protest took  place on 28th October 2011 outside Simply Jobs Board office http://www.simplygroup.net/    Capital House
,8 Pittman Court,Fulwood,Preston  01772 639048.
This business Simply Jobs Group set up http://www.canincrew.com/ who are helping Ryanair recruit students from this site to be cabin crew with a high level being Terminated for profit by Ryanair....After contacting Simply Jobs Group 3 times over the last 18 months to inform them of Recruitment for Termination at Ryanair and they are guilty of  helping Ryanair wreck not only my own daughter's young life but many more for profit....
Friday Media Group own Simply Jobs Group and run cabincrew.com and many other websites which will be targeted by RyanairDontCare Campaign.
info@fridaymediagroup.com
0870 127 9999
Friday Media Group Head Office,London Road, Sayers Common, West Sussex, BN6 9HS website
http://www.boatshop24.co.uk/

John said.
After my court case on 3rd November 2011 i will use all my energy to focused on Friday Media/Simply Group for Protest.....Simple message to FRIDAY MEDIA GROUP take Ryanair/StJames off your site http://www.cabincrew.com/  ''NOW'' 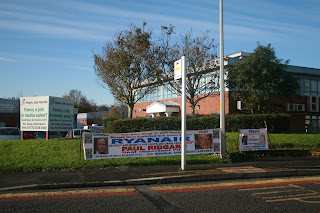 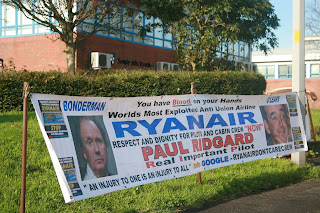 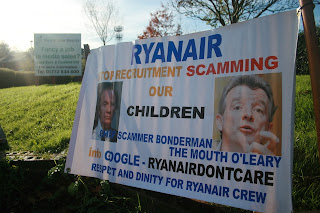 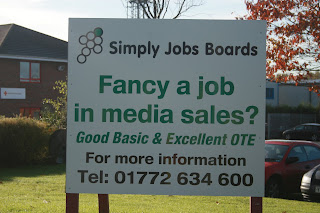 Posted by Europe's No 1 Anti Ryanair Campaigner John Foley.... at Monday, October 31, 2011 No comments: Links to this post