Today is a great day for Ryanair crew working in Denmark.The Danish court ruling by supreme judges can not be appealed by Ryanair which is GREAT.

Ryanair cabin crew in Denmark have placed SOS (save our souls) in the toilet of  the aircraft on Ryanair tissue.This is how exploited cabin crew at Ryanair feel which Ryanairdontcare Campaign has been exposing for six years.Look at the tissue photo below left in the toilet on board Ryanair... 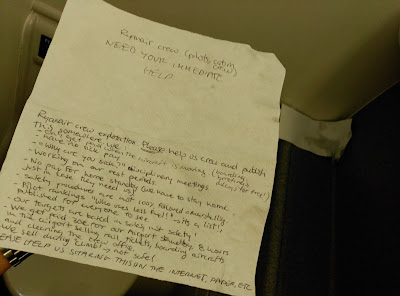 Report from Richard Milne below.

Ryanair is facing one of the biggest challenges to its low-cost model after the Irish airline lost a court case that could in effect make it impossible for the carrier to fly from Denmark.

A Danish court ruled that the airline, which has been trying to polish its damaged image in recent months, needed to sign a collective agreement with local staff or face a blockade from trade unionists

High quality global journalism requires investment. Please share this article with others using the link below, do not cut & paste the article. See our Ts&Cs and Copyright Policy for more detail. Email ftsales.support@ft.com to buy additional rights. http://www.ft.com/cms/s/0/bfdb4230-1ff5-11e5-aa5a-398b2169cf79.html#ixzz3efgjMGR5
The ruling means Ryanair would be highly unlikely to find workers to refuel and clean its aircraft or handle baggage, while passengers could be blockaded by striking workers.
The Irish company called the ruling “bizarre” and said it would immediately appeal against it.

The Danish storm against Ryanair has been brewing for some time as the airline locked horns with one of the countries with the strongest protection for workers in Europe.
The conflict even became an issue in Denmark’s recent election campaign after Copenhagen’s Social Democrat mayor banned municipal workers from using Ryanair for official trips.

“A victory for the Danish model. Great with a clear ruling from the labour court,” tweeted mayor Frank Jensen.
Ryanair had lampooned Mr Jensen with an advertising campaign depicting him as Marie Antoinette and the slogan “let them pay high fares”. It later said the publicity had resulted in a surge in bookings.
But the ruling is a blow both for Ryanair’s image and its attempt to use more central airports such as Copenhagen’s Kastrup rather than out-of-town facilities such as Paris Beauvais or Frankfurt-Hahn.
Ryanair conceded that the ruling appeared to allow unions to blockade its aircraft but said it would continue to operate 12 routes into Copenhagen using aeroplanes based outside Denmark.

High quality global journalism requires investment. Please share this article with others using the link below, do not cut & paste the article. See our Ts&Cs and Copyright Policy for more detail. Email ftsales.support@ft.com to buy additional rights. http://www.ft.com/cms/s/0/bfdb4230-1ff5-11e5-aa5a-398b2169cf79.html#ixzz3efgyngtr
“It is absurd for Danish trade unions to attempt to impose collective agreements on Irish air crew who spend less than 2 per cent of their working time in Denmark, and who already have the benefit of the collective agreement in place with Ryanair,” it said.
Danish unions have said that a cabin crew member for Ryanair earns less than half that for local low-cost rival Cimber which still has to pay Denmark’s high taxes.
Several Danish investors, including the city of Copenhagen, have said they would sell their shares in Ryanair.

The Danish case is not the first Ryanair has faced over its use of Irish contracts for staff hired in other countries with the airline. It was fined in France last year for not paying local social security payments, for instance.
But the scope of the Danish ruling — by either forcing it to pay its staff much more or allowing a blockade — seems to be the most serious threat so far.


TIME FOR US ALL TO BOYCOTT RYANAIR

STRICTLY PRIVATE AND CONFIDENTIAL Re: Ryanairdontcarecrew.blogspot.com Dear Sirs, Ryanairdontcarecrew.blogspot.com (“Ryanairdontcare”) is an anti-Ryanair site, which promulgates false and defamatory statements about Ryanair’s aircraft safety, operating procedures and crew employment conditions, both directly and also through the libcom.org blog. We are extremely concerned that Google has recently promoted this misleading and defamatory site by giving it prominence on the Ryanair page on Google News. The Ryanairdontcare blog was established by Mr. John Foley. It is not the first blog Mr. Foley has had and in fact a similar abusive blog by Mr. Foley, located at a marginally different address, ryanairdontcare.blogspot.com, was closed down by Google on 13 May 2011. Mr. Foley also had a site at www.irishaviationauthority.com which has been suspended. Mr. Foley developed his misguided grudge against Ryanair when his daughter had her probationary employment terminated (by one of our contract agencies) in November 2008 following the first seven weeks of her probationary employment due to repeated absenteeism. Ever since Mr. Foley has pursued an increasingly erratic and dangerous campaign to publicly defame Ryanair. This campaign has included stunts such as unsafe trespass on the roof of Liverpool Airport, trespass across the track at Cheltenham race course in March 2011 (endangering himself, the horses and jockeys) and more recently handcuffing himself to the goalposts at an English Premiership match in Goodson Park. As a result of these extremely dangerous stunts the UK police and court services have issued Mr. Foley with an Anti-Social Behaviour Order (copy as posted on Mr. Foley’s blog available on request) which will be the subject of a court hearing on 24 April next. Ryanair has not taken legal action against Mr. Foley because he has no resources and it would only serve to give him more publicity for his senseless and defamatory campaign. Ryanairdontcare’s completely untrue claims, which mainly denigrate Ryanair’s aircraft safety, operating procedures and crew employment, also include allegations of suicide and depression among our employees.

Look  at the part of the letter which said ''giving it prominence on the Ryanair page on Google News''.

This relates to the bottom of the google page.

Searches related to ryanair news..Photo below is what Ryanair are not happy about.. 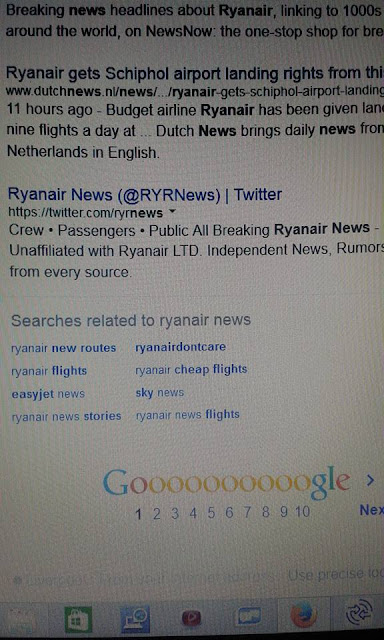 Now this is great news for Ryanairdontcare Campaign but it gets much better.I think it may be time for  Ryanair's Juliusz Komorek to contact Google again...

Google search engines have now put Ryanairdontcare Campaign on the main Ryanair pages of google which is amazing.Not selling anything but giving information about how Ryanair scam their new recruited cabin crew all over Europe by using  shell companies, (coming soon a post showing how one recruiter of cabin crew at Ryanair has become a millionaire many times over) Crewlink Ireland, Dalmac and Workforce International.These shell companies recruit young wannabe  cabin crew from all over Europe, charging up to £3,500 to train with thousands terminated before any legal employment protection is in place.The biggest scam is the per hour rate of pay given to these shell companies to pay these Ryanair cabin crew (same with pilots) with 50% given in salary and 50% kept by these shell companies, it runs into 100s of £millions each year.To keep the MAZE going termination is needed.

A full investigation is needed into Ryanair,Bank of Ireland,Allied Irish Bank and all cabin crew recruitment..The crew's PAYE is also a Ryanair Scam.

TIME TO BOYCOTT THIS AIRLINE...


Google Ryanair and our campaign is now on the first page.This has took six years to achieve ''are you watching David Bonderman and Mr O'Leary''Lol... 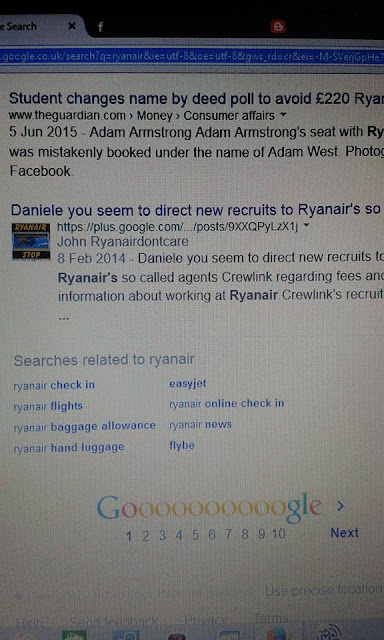 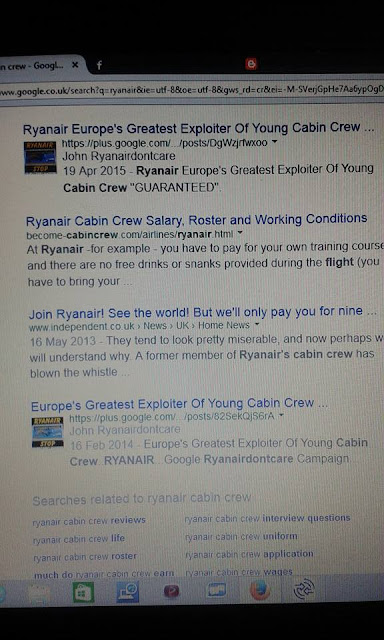 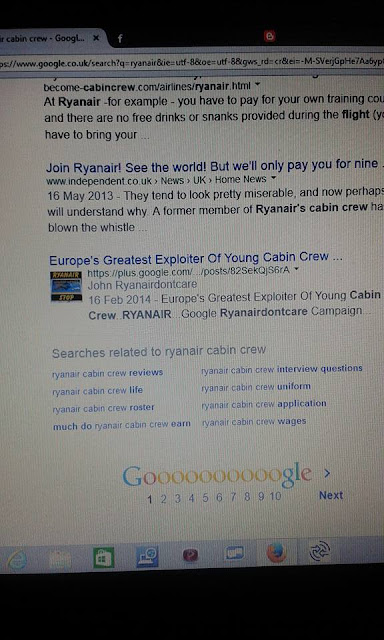 Google Ryanair jobs and look what you see..Six year to achieve Ryanairdontcare Campaign on first page on google..GREAT... 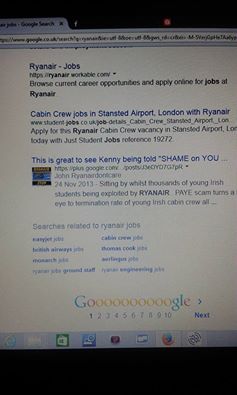 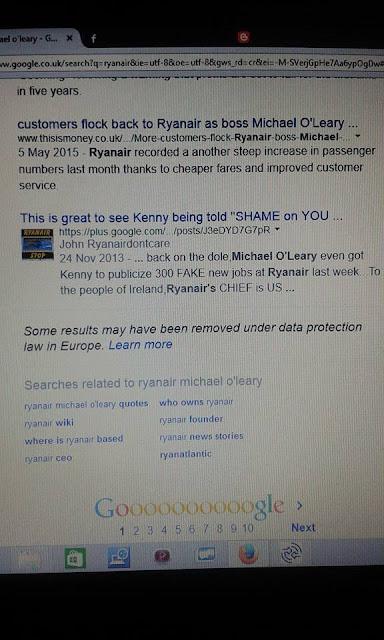 Google Ryanair David Bonderman who is the real chief at Ryanair. He is the scum bag behind wrecking the lives of so many young cabin crew.He showed O'Leary the ropes.

In 2010 this evil man changed his Wikipedia page after we contacted    him regarding his time with the attorney general office in United States,working in civil rights...You could not make this up.... 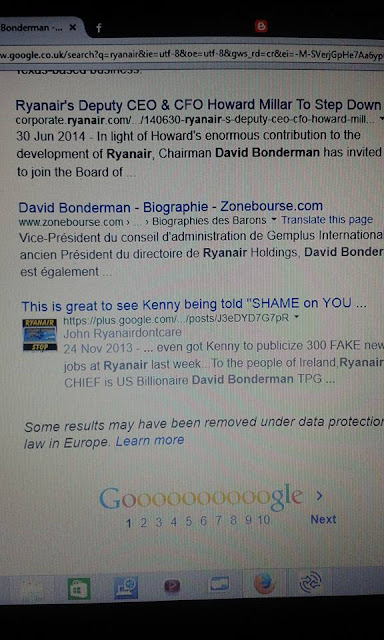 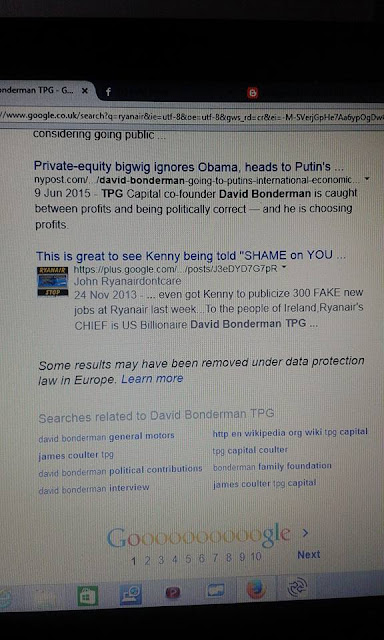 David Bonderman of TPG   https://en.wikipedia.org/wiki/David_Bonderman is a US billionaire who is the REAL chief at Ryanair.He has wrecked the lives of thousands of young people.Some even taking their own lives and all to improve the Ryanair share price..

TIME FOR US ALL TO BOYCOTT RYANAIR

Posted by Europe's No 1 Anti Ryanair Campaigner John Foley.... at Tuesday, June 30, 2015 No comments: Links to this post

Ryanairdontcare Campaign are truly the best  Anti Ryanair site on google dealing with exploitation of crew at Ryanair.We are pleased to inform our readers of our blog that our plus google account has received hits of  over one million .Total being 1,135,623..See below.A big thank you to you all and we are not selling anything ''Michael O'Leary''..
Ryanair AGM protest September 24th to follow... 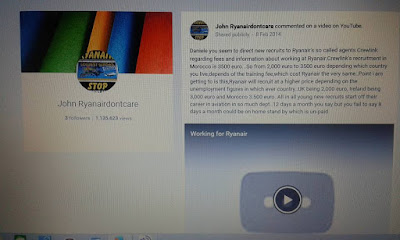 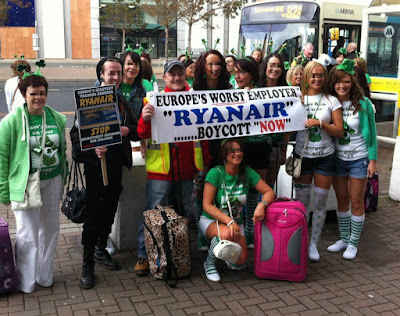 Posted by Europe's No 1 Anti Ryanair Campaigner John Foley.... at Tuesday, June 30, 2015 No comments: Links to this post

We did question on twitter this charity SCAM with jack and jill foundation's CEO Jonathon Irwin who is a former employee of RYANAIR , on twitter with him confirming he has not seen Michael O'Leary for 5 years.Could this be a lie?
Last week the Sunday Mirror did an article regarding £millions raised by Ryanair with less than 2% of £60 million going to any charity.Full post below.
http://www.mirror.co.uk/news/uk-news/ryanair-plane-unfair-charity-lotto-5920749?fb_ref=Default#ICID=sharebar_facebook

It has just come to our attention (better late than never) that Jack & Jill foundation's twitter account  @jjfoundation has been deleted with @JackandJill1997 taken its place.
I can not confirm but i guess it was closed down last year after we questioned the  €20,000 Ryanair gave to Jack & Jill Foundation on 18th December 2013 from the on board charity scratchcards sales of £12 million. We can confirm no other published report is available showing other donations made by Ryanair from the on board charity scratch card since Ryanair started asking questions early 2014.
Why would a charity so important to helping children closed down their twitter account when questions are asked regarding money from Ryanair charity scratchcard.It is much easier to block us on twitter like Jonathon Irwin did (look at our facebook page) https://www.facebook.com/pages/Ryanair-Dont-Care-campaign-RYANAIRDONTCARE/327346637276632?fref=ts
Could this be money laundering??????
''disguise the original ownership and control of the proceeds of criminal conduct by making such proceeds appear to have derived from a legitimate source''
A full investigation is needed into the above..

Are you feeling LUCKY Mr O'Leary 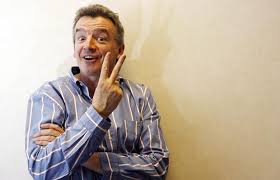 will you John Foley
''NEVER'' 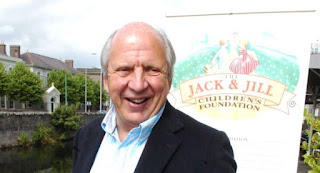 Jack & Jill Foundation CEO Jonathon Irwin who is Michael O'Leary's Mate.
''KEEPING IT IN THE FAMILY''