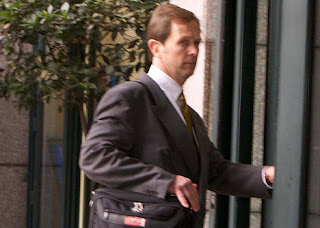 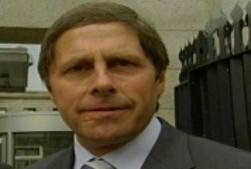 What a week it has been for David Bonderman from TPG who is chief at Ryanair and Michael O'Leary.Ryanair share price is falling,over 6% since 12th August..''GREAT NEWS''...
On Monday 12th August we had the Dispatches programme on channel 4 which was seen by millions.
We must understand that pilots and cabin crew at Ryanair have had enough of being cheated out of their salary payment,bullied by management and in some cases has lead to Ryanair crew committing suicide.Ryanair recruit young people all over Europe as probationary cabin crew charge a training fee of 3000 euro with 60% being TERMINATED for profit that is ignored by the Irish government.
If this above was not bad enough then breach of SAFETY at Ryanair to make higher profits must be fully investigated independently.Ryanair pilots,cabin crew and many organisations involved in aviation have no faith in the Irish Aviation Authority..The Irish Aviation Authority seem to be turning a blind eye when it comes to Ryanair's breach in safety. Ryanairdontcare Campaign sent the Irish Aviation Authority plus Boeing a letter in 2011 to inform them of a serious breach in safety at Ryanair with photo evidence plus a Ryanair memo stating this breach.No reply came from the Irish Aviation Authority or Boeing so it was posted on Ryanairdontcare's first blog which was closed down 48 hours later.A tracking device was placed on this deleted blog and as you can see Boeing paid a visit  hours before it was deleted looking at this post.


Ryanair have 8 former employees now working at The Irish Aviation Authority.This is why the IAA say the 3 mayday calls in 2012 were not dangerous....
Ryanair priority is PROFIT even if it puts passenger and crews lives at risk...
Ryanair delete cock pit voice recorder as a way to conceal incidents which The Irish Aviation Authority are aware of and turn a blind eye......Profit being priority.......

Our protest outside  The Irish Aviation Authority...

John said,
Very sad that Ryanair treat pilots and cabin crew so bad.  IRISH AVIATION AUTHORITY are in Ryanair's pocket.. Members of the public will not see the full dangers as pilots do...Time to listen, Time to BOYCOTT Ryanair before it is to late.
RYANAIR Share Price fell over 4% after Channel 4 safety issues exposed by Ryanair pilots which is great news for David Bonderman and Michael O'Leary....
Posted by Europe's No 1 Anti Ryanair Campaigner John Foley.... at Monday, August 12, 2013 5 comments: Links to this post

John said,
As you will see from end of the article above,''The airline said the investigators’ report was factually inaccurate and insisted the Irish Aviation Authority had “no concerns over Ryanair’s fuel policy”

Posted by Europe's No 1 Anti Ryanair Campaigner John Foley.... at Monday, August 12, 2013 No comments: Links to this post

RYANAIR We MUST ALL BOYCOTT....Ryanair Refuses Refund For Dead Passenger Beryl Parsons, Because She Died Too Soon..


Ryanair Refuses Refund For Dead Passenger Beryl Parsons, Because She Died Too Soon

A bereaved son plans to strap a vase of his mother's ashes on a Ryanair flight to the Canary Islands, after the budget airline refused to offer a refund when his mother died.
Doug Parsons was hoping to take one last holiday with his ailing mother Beryl, who had terminal cancer, and had booked some October sun in Fuerteventura, flying out in October.
But his 78-year-old mother, who lost six stone in her battle with cancer, died on June 24. When the financial controller from Norwich contacted the airline for a refund of his mother's £200 share of the £1,074 in airfares he had paid, along with her death certificate, he was astonished by the reply.

Ryanair offered Parsons its "condolences" but said it would not refund the fare, because Mrs Parsons had died too early.
The letter read:


"Unfortunately, we regret to advise you that in accordance with Ryanair's General Conditions of Carriage detailed below we cannot refund your booking confirmation RF1SGP – see below extract from our Conditions of Carriage:10.3 BEREAVEMENTS
In the case of a bereavement of an immediate family member (spouse, civil partner, mother, father, brother, sister, child, grandparent or grandchild) within twenty eight days of intended travel we will, upon application made as soon as reasonably practicable but in any event by the proposed date of travel and accompanied by a copy of the applicable death certificate, make a refund in line with Article 10.2.
Please again accept our sincere condolences.

"She was so well liked that even her consultant surgeon came to her funeral as did two of the ward sisters," Parsons told HuffPost UK.
"The irony is that we first discussed going away together at Christmas time last year and planned the holiday for June. And then she got worse so we postponed booking it.
"If we'd have gone at the time we'd planned, and she'd died just before we went away, we'd have got the refund. It's unbelievable."

His mother, Parsons said, had been looking forward to the holiday with her son, his partner Lisa and two children Cameron and Tanya, immensely. "It had been keeping her going. When she was told in June she only had three weeks to live, her first thought was about the holiday."
"This is absolutely not about the money, it's the principle," he continued. "If they don't give the refund, I will take the ashes, and take them on all the disability assistance I'd booked for her, and strap the ashes onto the seat, video it all and put it on YouTube."
Parsons said he would never fly with the airline again. "I'd been planning a trip with Lisa to Rome, but seeing as all the cheap flights there seem to be with Ryanair, we won't be going."
Ryanair has yet to respond to requests for comment...

John said,
Total Boycott is needed for this airline Ryanair who are SCUM.... 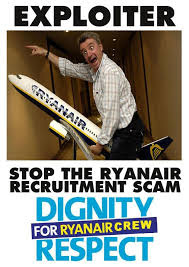 Posted by Europe's No 1 Anti Ryanair Campaigner John Foley.... at Monday, August 12, 2013 No comments: Links to this post