John said,
For many years the employment authorities all over Europe have been fully aware on how Ryanair exploit their pilots and cabin crew.Setting up bogus contracts through shell companies set up by Michael O'Leary and David Bonderman in other individuals names.The Ryanair Pilot Group and other union organizations in the aviation sector have let so many,not only Pilots but thousands of young cabin crew down in a big way.
These organizations have shown NO back bone when it comes to dealing with Scum bag David Bonderman and Michael O'Leary..
The contracts,salary per hourly scam,terminations and pure pressure pilots and cabin crew at Ryanair are under, these unions and government employment agency have much to answer for.
The Irish Aviation Authority and the Irish Government have worked closely together in Ireland setting up employment legislation's that have benefited Ryanair in a very big way.I do believe for years (and continue) Ryanair have been given favoritism by the Irish Aviation Authority  and the Irish Government,this has helped Ryanair exploit their workforce at every level like no other European airline if not world wide airline which has wrecked so many young cabin crew's lives and could have contributed ( i say it did) to the suicidal death of Ryanair Liverpool pilot Paul Ridgard in 2011 which was never reported on in the MSM.
With hundreds of millions £ each year generated through exploitation of Pilots and Cabin Crew by Ryanair no wonder Favoritism is a key factor in Ireland.
Who Is Lining Who's Pockets..........
Brookfield Aviation's Commercial manager, Scum Bag Declan Dooney who is the ex-head of Ryanair HR,left Ryanair to set up the desired pilot contract workforce for Ryanair which is racking in Millions £ each month.Declan Dooney who likes lying to Judges in court is leaving Brookfield Aviation to start work at Ryanair's Shell company Crewlink Ireland Ltd who exploit cabin crew which generates a higher return in profits through the per hour rate of pay Scam.Since 2004 Crewlink have Terminated over 12,000 new recruits for the sole purpose of generating millions each year in profit.
We call it RECRUITMENT for TERMINATION..
Look at the report i did in 2010 on Dooney below.
http://ryanairbrookfielddontcare.blogspot.co.uk/2010/12/declan-dooney-one-slippery-ryanair-guy.html


From the Ryanair Pilot Group.
BREAKING NEWS - Brookfield Aviation investigated on suspicion of Wage Tax Evasion & Social Secur
ity fraud in Germany as 50 pilot also examined.
Brookfield Aviation have so far declined to comment on the investigation. Nearly two thirds of pilots flying for Ryanair must do so through the Ryanair/Brookfield/Storm bogus self-employment model which leaves pilots with no job security or employment rights.

The Irish airline Ryanair can fly many planes of pilots who are not employed by you. Now, the health insurance companies want to see money.
The pilot system of budget airline Ryanair device for information from WDR, NDR and Süddeutsche Zeitung increasingly under attack: The Koblenz prosecutor leads for quite some time - as reported - a case against an employee of a British employment agency on suspicion of wage tax evasion and on suspicion of Social Security fraud and also the living rooms of three pilots searched on suspicion of aid. Is determined in Koblenz total to about 50 pilots. In the staffing agency is according to the information about the company Brookfield Aviation Limited. Against those responsible for Ryanair is therefore not determined.

Now also the central association of health insurance (GKV) has turned on. He has examined the situation of so-called Contractor pilots at German Ryanair bases. "The characteristics of self-employment confront the features gainfully employed significantly in the background, so you have to look at social insurance law as an employee ...", according to a letter from the GKV to Erik Fengler, one of the pilots concerned, the sooner flew for Ryanair. Now calls the association that social security contributions be paid subsequently for him and other pilots.

What like an ordinary guerrilla war to temporary work and bogus self-looks, may materially impact the airline business. Several low-cost airlines can often machines from pilots flying that are not permanently employed and have no guaranteed income. The pilots are instead mediated by recruitment agencies to airlines and Video- as in the case Ryanair - obliged to register themselves. Formally, they are then managing their own business and work independently. Ryanair is expected to employ about 3,000 pilots, one third of its Captains and more than half of his First Officer should not be employed directly by Ryanair. The company saves as the charges for patients, social, pensions, accident - and unemployment. Upon request to the Secretary of the Central Federal health insurance explained Ryanair: "We do not comment on documents that we do not know in any case the use of contractor-pilot remains legal and it is very common in the aircraft industry.." Some companies even go much further than Ryanair. In their flights, the co-pilot got no money, but have to pay for the use itself. Some pilot candidate can be a fact, because they can accumulate flying hours just in this way.

Taking an overall view of the low cost market conditions with Ryanair are not even very bad. Similar models use other budget airlines. German health insurance companies gradually those pilots not as self-employed, but as a worker of the personnel service.

In the case Fengler the GKV lists some reasons: The pilot did Ryanair uniform worn and is committed to stand by eleven months of the year. The pilot had no right to refuse applications. Therefore you acknowledge "no significant business activities". It lies so that a "full-time availability for Brookfield Aviation, including a scheme of paid leave before as it exists among workers". The personnel agency Brookfield Aviation Limited declined to comment on the request to process.
The new VW Touareg Facelift.
Diesel scandal
Exhaust affair expands and reaches Porsche

The US EPA has found manipulation software in models of the VW group with three-liter engine. Among bestseller as VW Touareg, Porsche Cayenne and various Audi models.
In France and Italy, the airline has already lost processes

Not only in Germany authorities have taken action in this case. In France, Ryanair was ordered to pay eight million euros due to evasion of social security contributions. A large part of the sum was awarded the Social Security, part benefited from the pilot pension fund. Also in Rome, a court dealt with the case. 3.2 million euros was spent afterwards to the Italian National Social Security Institute. Even in England the contractor model is under investigation.

This Wednesday is now available in the matter also before the Labour Court in Wesel a court appointment. Pilot Fengler has sued Ryanair and British recruiter Brookfield Aviation. Similarly, "like many of my former colleagues," he says, he agrees with the audit by the statutory health insurance. Only at one point he did not agree with. To him was not the Brookfield great opponents, but Ryanair as the actual employer. The essential service instructions would get the pilots directly from Ryanair. These included flight and service plans, manuals and current transfers. 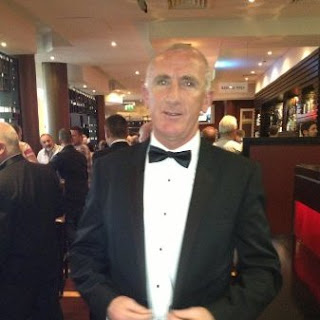 Posted by Europe's No 1 Anti Ryanair Campaigner John Foley.... at Friday, November 06, 2015 No comments: Links to this post

Pay to fly the Ryanair way to exploit pilots and cabin crew.http://m.youtube.com/watch?sns=fb&v=d8Gvt4VJylI..RYANAIR PILOT.

Ryanair exploit pilots and cabin crew for profit.Bogus contracts with the highest termination rate of new recruited cabin crew..Time to boycott Ryanair.
Pay to fly the Ryanair way to exploit pilots and cabin crew.http://m.youtube.com/watch?sns=fb&v=d8Gvt4VJylI
Pilot's and Cabin Crew contacted to work on Ryanair have no sick pay whatsoever..80% of cabin crew at Ryanair are contracted through Ryanair she'll companies Crewlink Ireland and Workforce International with 60% of new recruited cabin crew terminated under 12 months..PER HOUR RATE OF PAY SCAM MUST BE INVESTIGATED...
Watch this video below and you will understand why Ryanair pilots are stressed and depressed when they are working for Europe's Greatest Exploited Airline .How safe are you????

Posted by Europe's No 1 Anti Ryanair Campaigner John Foley.... at Tuesday, November 03, 2015 No comments: Links to this post