Ryanair boss Michael O’Leary earns over €6,575 each day whilst in many cases his cabin crew take home less than €600 a month.

YOU STILL WANT TO FLY RYANAIR

A RYANAIR plane was forced to divert to East Midlands Airport after it suffered difficulties in the air. 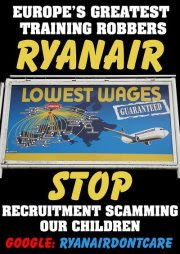 RYANAIR FLIGHT WINDOW FRAME FALLS OUT ON PASSENGER..THAT'S WHY FLIGHTS ARE CHEAP.

Holidaymaker gets the shock of his life when a window frame of the Ryanair flight he is on falls into his lap..

A holidaymaker was left shocked after a plane's window frame fell on to his lap as the Ryanair flight came into land.
Laurence Gibson was on board the aircraft as it came into land at London Stansted airport on Sunday.
But the 37-year-old teaching assistant says he was left traumatised after the window reveal fell on him as the aircraft touched down. +3
Laurence Gibson holds the loose plane reveal, which fell into his lap when the Ryanair flight he was travelling on came into land at London Stansted
Mr Gibson, who was coming back from a week-long holiday in Gdasnk, Poland with his partner Matt, said: 'It was the scariest moment of my life.
'I'm a nervous flyer as it is but this has just made it worse. As soon as we touched down the inside of the window just fell into my lap.

'Landin is the worst part for me and I was already clutching Matt's hand before.
'I was absolutely hysterical for a while.'
Mr Gibson had paid £144 for the return flight to Poland, which took place in the first week of his summer holidays.
The flight was booked through Ryanair but was being operated by Air Explore. +3
Mr Gibson, who was coming back from a week-long holiday in Gdasnk, Poland with his partner Matt, said: 'It was the scariest moment of my life'

Ryanair say they have noted the dislodging of the window reveal and asked the operator of the flight to ensure it does not happen again
He added: 'The plane looked a little dilapidated not the usual Ryanair standards.
'To be fair to the staff though, they were really nice about it. They couldn't apologise enough.'
A spokeswoman for Ryanair confirmed the window reveal had fell, saying they have asked Air Explore to investigate.
The spokeswoman explained: 'We note the dislodging of this window reveal, which is used only to protect the window from scratches.
'We have asked the operator of this lease-in aircraft (Air Explore) to ensure that it does not recur.'

Ryanair Europe's greatest exploiter of cabin crew has been ordered to give Channel Four TV Corporation documents related to its fuel policy between 2010 and 2012 in advance of the hearing of proceedings brought by the airline over alleged defamation.
Channel Four Television Corporation has in turn been ordered to give Ryanair documents relating to investigation, research or inquiry made by it, or by  Blakeway Productions Ltd, concerning a programme entitled Secrets from the Cockpit. The programme was made by Blakeway and broadcast on August 12th, 2013, as part of Channel Four’s Dispatches series.
The Court of Appeal made various discovery orders on Wednesday in an appeal on pretrial discovery issues in proceedings by Ryanair alleging it was defamed in the programme. Both sides appealed against various discovery orders made by the High Court.

Giving the appeal court’s judgment, Mr Justice Gerard Hogan said the Dispatches programme featured interviews with a number of Ryanair pilots. The general theme of the programme was to the effect Ryanair had endangered passenger safety by operating a low-fuel policy and by pressuring its pilots to take as little fuel as possible, he said.
He said the programme also recounted events involving Ryanair aircraft alleged to have taken place at Valencia Airport on July 26th, 2012, and at Memmingen Airport in Germany in September 2012.
The judge said Ryanair immediately issued High Court proceedings alleging the programme was defamatory. The defendants denied defamation, pleaded the allegations were true in substance and in fact and they were entitled to the defence of honest opinion.
Both sides later sought discovery with Ryanair effectively seeking all material used in making the programme and related to editorial decisions.
Channel Four sought all documents related to in-flight fuel-related incidents and correspondence between Ryanair and the Spanish and Irish regulatory authorities concerning the Valencia incidents.
The judge allowed the appeal by both sides against aspects of some of the discovery orders made by the High Court.

He ruled the High Court order directing discovery relating to Ryanair’s fuel policy from 2009 was too broad. While this category was “plainly relevant” and Channel Four was entitled to the airline’s fuel tables and policy documents discussing fuel policy between 2010 and July 26th, 2012, any wider discovery was not necessary, he said.
He also limited a discovery order concerning safety-related incidents to the period between 2010 and July 26th, 2012. The time period relates to the incidents themselves so any documents related to the Valencia incident which post-dated that incident was included, he said.
Channel Four was not entitled to documents regarding Ryanair’s policy and practices concerning employment and hiring of pilots in the five years to July 26th, 2012, the judge said. Allegations concerning the airline’s employment practices were really just a byproduct of the key allegation made in the programme, that the airline operates a potentially hazardous fuel policy, he said.
Dealing with documents sought by Ryanair from Channel Four, the judge ruled Ryanair was entitled to documents related to editorial decisions bearing on the entitlement of the defendants to invoke the defence of honest belief and fair and reasonable publication.
The airline was also entitled to documents related to research and investigations carried out by the defendants for the programme, the judge said.
The judge said journalists cannot normally be compelled to reveal their sources but that protection was not absolute. The issue of protection of sources was, at present, premature in this case, he said. If Channel Four wished to invoke protection of sources, it could set out the factual basis for that in an affidavit of discovery later, he said.
Nothing in the court’s judgment was to be taken as expressing any view how issues concerning sources should ultimately be determined, he stressed.
Mr Justice George Birmingham and Ms Justice Mary Irvine agreed with the judgment. Given the discovery outcome amounted to a “score-draw”, Mr Justice Birmingham said both sides should pay their own costs of the appeal. 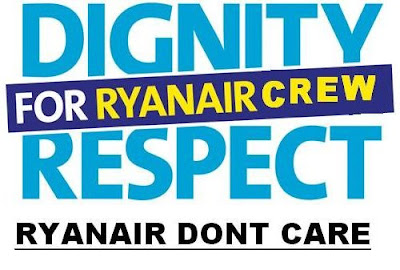 Due to the fact that this blog is generating between 300 to 400 visits a day from all over the world and we are not selling anything here, we have decided to change what is being posted here.Any negative news that relates to  Ryanair will be posted.
You are all aware Ryanair are the largest low cost airline in Europe (something they are proud of) with up to 1500 flights a day but Ryanair TERMINATE the largest probationary cabin crew in Europe also.This TERMINATE has no reflection  on the vast amount of flight but TERMINATION is PROFIT for Ryanair.
We expect even more people will visit Ryanairdontcarecrew.blogspot.com and let us hope even more young people wishing a career in aviation as cabin crew see this blog. 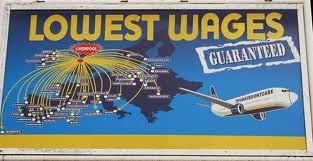 RYANAIR SENIOR MANAGEMENT Are SCUM.DECLAN DOONEY Of BROOKFIELD Is SCUM.


Posted by Europe's No 1 Anti Ryanair Campaigner John Foley.... at Friday, July 31, 2015 No comments: Links to this post