We’re all subsidising Ryanair: The O’Leary & BONDERMAN Myth....Time for all to BOYCOTT RYANAIR...

John said,
''TIME FOR ALL TO BOYCOTT RYANAIR''
Posted by Europe's No 1 Anti Ryanair Campaigner John Foley.... at Friday, September 27, 2013 2 comments: Links to this post

RYANAIR HIGHER PROFIT ON DEATHS..''GUARANTEED''.. ''TIME FOR ALL TO BOYCOTT RYANAIR''..PRIORITY PROFIT On DEATHS...

Irish airline Ryanair and Spanish travel company Rumbo are locked in a bitter dispute over an alleged increase in flight prices to Santiago de Compostela after July's fatal train crash near the city.

The son of one of the victims — the paper gave his only name as Ángel — had tried to book Ryanair flights from Madrid to the northern city of Santiago de Compostela using the flight search engine Rumbo on the morning after the June 24th train accident.

At 6am he booked two flights for a total of €471 ($627). He was then told to wait for an email confirming for the reservation.

Two hours then passed without the email arriving.
El Mundo then reported that when Ángel's partner Elisa called Rumbo, the company said they had been unable to confirm the booking because Ryanair had bumped prices up to a total of €800 for the two passengers.
The couple then decided to drive 600km (373 miles) to Santiago de Compostela because they didn't "want don't anyone to make money" out of their "misfortune".
But now Ryanair and Rumbo are engaged in a public relations battle with both sides asserting they didn't raise the prices of the tickets.
On August 8th, lawyers acting for Ryanair contacted Rumbo asking for the matter to be cleared up.
In a fax sent to the Madrid-based company, lawyers for the Irish airline said internal investigations had revealed no record of  bookings for two customers called Ángel and Elisa.
Ryanair also said it could demonstrate that none of the three Madrid—Santiago flights on July 25th had individual seat prices of €400.
In their fax, the carrier asked Rumbo to confirm that they had never made bookings for Ángel and Elisa.
They also asked the Spanish firm to state that the couple's flight reservation had not been cancelled because Ryanair had increased prices.
The airline asked for this confirmation to be provided by August 12th or legal action would be taken. That date has now passed.
Travel search engine Rumbo, meanwhile, issued a statement in which they said they have no influence over airline prices.
"Rumbo, as a travel agency, acts as an intermediary between airline companies and the client , providing comparison and booking services," said the company.
"Availability and flight prices are published by the airline carriers," Rumbo added in its statement.
On Monday, Spain's Confederation of Housewives' Organizations, Consumers and Users (CEACCU) entered the fray, but going after both parties rather than taking sides.
Acting on behalf of families of victims of the train crash, the CEACCU has taken the issue to authorities in Galicia, where the accident happened.
They are claiming the sudden increase in ticket prices forced some families to take alternative transport in the wake of the crash.
The rise in prices was "unfair and liable to administrative sanctions", the association said.
The CEACCU wants believes Rumbo and Ryanair could be liable for fines ranging from €15,000 to €16,000.

John said,
You can bet this is Ryanair charging a higher price after the deaths of so many in Spain. 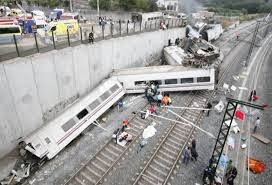 Posted by Europe's No 1 Anti Ryanair Campaigner John Foley.... at Friday, September 27, 2013 No comments: Links to this post

RYANAIR CHARGE PASSENGER EVEN THOUGH HE TOLD RYANAIR HE CHANGED FLIGHTS AFTER FAMILY DEATHS..

Ryanair refunds tragic Dublin surgeon after charging him €188 to switch flights after learning of deaths of family.....

Mr Sattar attempted to switch from his normally scheduled flight on Saturday morning to an earlier one after learning of the house fire which claimed the lives of his wife and three children.

In an interview with a newspaper today, the respected neurosurgeon who works in Beaumont, Temple Street Children’s Hospital and the Hermitage, said he explained the circumstances behind his change of flight.
Mr Sattar said he was fighting back tears as he explained his situation to an employee at the check-in desk last Friday morning.
However the airline charged him the full new ticket price, €188, to book the new flight.
In the statement issued to the Irish Independent this morning, the airline said: Ryanair offers its sincere condolences to Dr Sattar and confirmed that in the circumstances it will provide a full refund of any monies paid last Friday.”

John said,
Even though Mr Sattar had explained his family were killed Ryanair STILL charged him to change his flight.Only after the press got involved did Ryanair issue a refund  ..Profit being the priority at Ryanair safety must be a serious issue....
''TIME FOR ALL TO BOYCOTT RYANAIR''
Posted by Europe's No 1 Anti Ryanair Campaigner John Foley.... at Friday, September 27, 2013 No comments: Links to this post

Many members of the public have been in contact with Ryanairdontcare Campaign expressing their anger at the treatment they have experienced by Ryanair regarding flight bookings,extra charges,cancellation and more importantly the lack of empathy whatsoever from RYANAIR with regards either death of a love one or A severe life threatening illness..

Personal stories from passengers that feel they have been treated badly by Ryanair..You can send your story to  ryanairdontcare@yahoo.co.uk  and they will be published here.


Photo below taken at the Ryanair AGM 2013 were chief exploiter David Bonderman was scared to attend thanks to Ryanairdontcare Campaign... 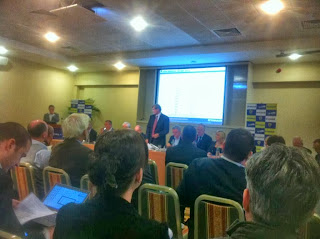 Posted by Europe's No 1 Anti Ryanair Campaigner John Foley.... at Friday, September 27, 2013 No comments: Links to this post

Ryanairdontcare Campaign have been contacted today from a student who took in the Ryanair recruitment and training SCAM in 2012.We wish to thank this student and wish you the best of luck in your future.
As you can see from their own words,Ryanair not even letting this young student stay in the right hotel....SCAM SCAM SCAM....
Comment below from this student.
Anonymous said...
I did the training at Hahn 2012 and one word DISGRACE - PLEASE NO ONE PUT MONEY INTO THIS TRAINING...GO FLYBE..EASYJET ETC NOT THESE GUYS!!!

I went to the seminar in dubin hotel and it looks promising - good pay , nice locations bla bla.. They told us we could pick of the 3 bases and most of the time it would be given.

I paid the money and waited - i was meant to get an email stating base i was getting before leaving..and never...but i went anyway BIG NO NO.

First day my name is on sheet saying PISA..I WOULD NO WAY WANT TO GO TO PISA..I ONLY WANTED UK OR IRELAND BASE!!!! That annoyed me...

Then accommodation is also ridiculously expensive esp for something in middle of nowhere!! We were told we would be staying in a 4 stay hotel - they even met us at one ...but no we got transported to some horrible hostel.

I wasn't well at the time of going so you can imagine a week in i was tired and lacking food. I had to go to the nearby hotel to get something 3 times a week..i couldn't afford to everyday...the rest of the time was in supermarket getting simple things day by day. The supermarket was also a 30min walk on a old country road which i felt unsafe on. You go to classes from 8am to 6pm with one break - there is no cafe...so you sit on step to eat from a bap van that comes once a day...that is like your only hope!

PLEASE ANYONE THINKING OF THIS PLACE PLEASE DON'T WASTE YOUR MONEY...THE ONLY THING I GAINED WAS 2 STONE LIGHTER AND ILL FROM IT ALL...AND OUT OF POCKET.

25 September 2013 00:08
John said,
Clearly you can see the Crewlink website below which is not a hostle...Not only are these young people Terminated for profit,they are treated so badly from the start...
http://www.crewlink.ie/en/accommodation-gallery
''Time to stay clear of Ryanair if you want to become Cabin Crew''..