RYANAIR CABIN CREW NEW RECRUITS...........RYANAIRDONTCARE'S BLOG....SEE HOW LONG BEFORE THIS POST IS TAKEN DOWN BY ''Ryanair'' SORRY I MEAN CABINCREW.COM ....RECRUITMENT SCAM.... 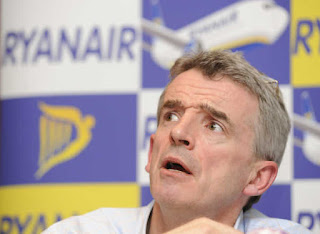 Ryanairdontcare Campaign founder John Foley has had the first press article which tries to discredit him with a great mention of  “Ryanair: Europe’s Greatest Training Robbers'' T-shirt...

A full report on this article which was place in the Liverpool echo will be place on this blog Saturday 23rd June 2012...This article will include the history of the Hillsborough coin...
Liverpool Echo editor has been send email below.

I would hope your paper would let the readers of your paper continue to comment on the
article below and would hope the echo would be impartial to the dispute between myself
and Ryanair.
http://www.liverpoolecho.co.uk/liverpool-fc/liverpool-fc-news/2012/06/22/serial-liverpool-sports-event-protester-john-foley-at-centre-of-botch-hillsborough-coin-venture-100252-31236531/#sitelife-commentsWidget-bottom

Ryanairdontcare Campaign.
Posted by Europe's No 1 Anti Ryanair Campaigner John Foley.... at Friday, June 22, 2012 No comments: Links to this post

Ryanairdontcare Campaign can confirm that Mr Komorek is heavily involved not only with Ryanair but also involved with Mr O'Leary's other business interests...A true pair of EXPLOITERS of young people to which the European Parliament are aware of.
Posted by Europe's No 1 Anti Ryanair Campaigner John Foley.... at Thursday, June 21, 2012 No comments: Links to this post

WE MUST NEVER FORGET

Ryanairdontcare Campaign had a 5 day 4 night camp at John Lennon Airport in Liverpool to remember a Real Important Pilot at Ryanair Mr Paul Ridgard who sadly passed away in 2011.We must stress that Ryanair have forgotten about Paul and many people in the aviation industry and John Foley have stressed their sadness at the way in which the CPS dealt with the coroners report.The inquest report was conducted by Manchester Police who in tail forwarded their findings on to the CPS who thought about employment issues which we know were raised in this report..Ryanairdontcare Campaign can confirm that the CPS felt employment issues involving Mr Ridgard would have been to expensive to contest and were not include in the report sent to the  corners office.                      ''We Must Never Forget'' 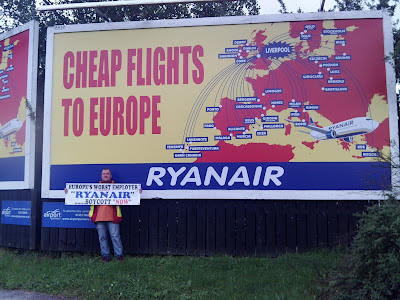 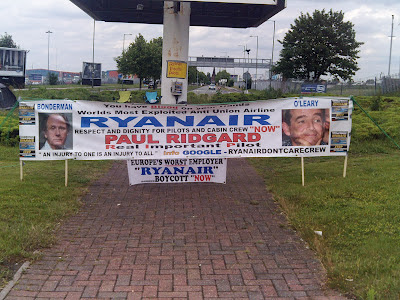 Photo above Camp base at the main roundabout... 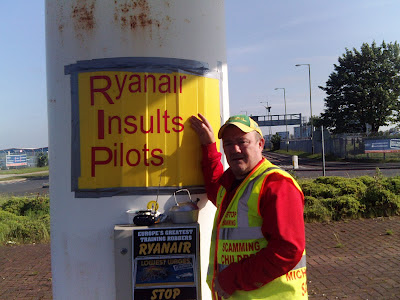 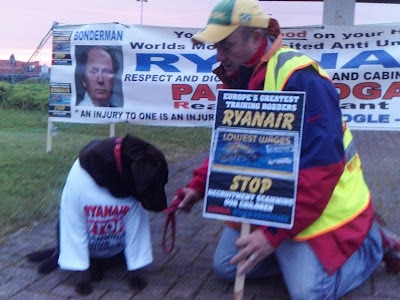 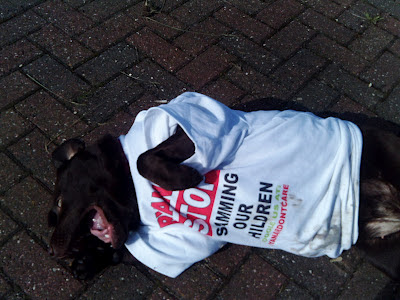 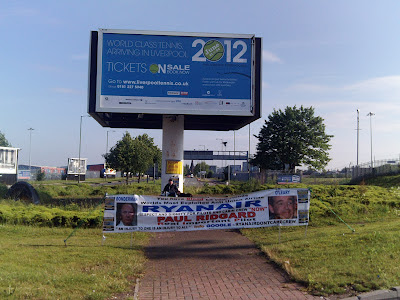 Photo above of Base Camp... 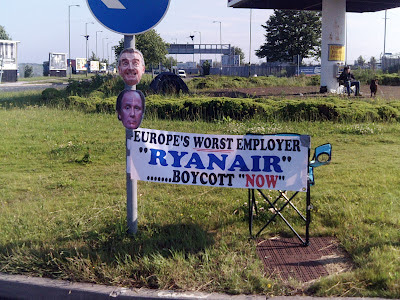 Photo above is of the two Chief Exploiters.
David Bonderman & Michael O'Leary

John said,
I wish to thank Liverpool John Lennon Airport for their  facilitation of this Camp to remember Mr Ridgard
a Real Important Pilot....
Many staff, passengers and crew from other airlines showed a lot of interest and were all handed a leaflet.
The Police were fine with me and at one point i asked two police officers did they know about Mr Ridgard and i was shocked as they both said no,these two police officers had worked at the airport for two years and Mr Ridgard was based there.Just goes to show how things are hushed up at John Lennon Airport.
Suicide is a very sad issue and must be tackled.
On my last day a police officer did confirm he new about Mr Ridgard. I was informed by the airport management that they have a memorial garden at John Lennon Airport which i found and will ask if something can be placed there for Mr Ridgard in the near future.

If Michael O'Leary ever owns  Aer Lingus more Irish young people will be exploited as cabin crew.O'Leary's attempt  yet again to buy Aer Lingus MUST FAIL......The Irish government need to wake up and stop this sociopath ''NOW''.

http://www.rte.ie/news/2012/0619/ryanair-makes-all-cash-offer-for-aer-lingus.html
Posted by Europe's No 1 Anti Ryanair Campaigner John Foley.... at Wednesday, June 20, 2012 No comments: Links to this post

As you can see the post below was placed today on cabincrew.com who are paid by Ryanair to advertise on their website.

Posted by Europe's No 1 Anti Ryanair Campaigner John Foley.... at Sunday, June 17, 2012 No comments: Links to this post

Ryanairyet again have asked Google to delete 123 post off this blog from .co.uk
We can confirm these post below are now deleted in Ireland and the UK .This will confirm the effect Ryanairdontcare Campaign is having on the very Low recruitment in Ireland and UK of probationary cabin crew at Ryanair and as Michael O'Leary keeps saying ''our campaign is doomed to fail'' well Mr O'Leary it gives Ryanairdontcare Campaign great pleasure making it harder for you to SCAM young people and we will continue.....24/7.All posts are copied and kept...

The notice that we received, with any personally identifying information removed, will be posted online by a service called Chilling Effects athttp://www.chillingeffects.org. You can search for the notice associated with the removal of your content by going to the Chilling Effects search page athttp://www.chillingeffects.org/search.cgi, and entering in the URL of the blog post that was removed. If you have legal questions about this notification, you should retain your own legal counsel.

We all know why these posts above were taken down...Ryanairdontcare Campaign have hit recruitment of probationary cabin crew at Ryanair....See google article below.

a
a
Previous StoryNext Story

ZoomBookmarkSharePrintListenTranslate
From page 1 GOOGLE HAS described as “alarming” the repeated pattern of western governments asking it to remove political content from its search engine and websites, as shown in a report released today.
The release coincides with an Organisation for Security and Co-operation in Europe conference on internet freedom being held in Dublin Castle today.
Google’s latest transparency report shows the Spanish authorities were one of the biggest applicants for political content to be taken down from July to December 2011. The report details government applications for information to be removed from Google’s search engine and websites.
Google received 14 requests from the Spanish data protection authority to take down 270 search results linking to blogs and sites referencing individuals and public figures during the report period.
Search engine results linking to Spanish newspaper articles and official records about criminal convictions of local mayors were among the removal requests.
The authorities asked Google to take down links to the articles but did not ask the newspapers (including Spain’s largest daily paper, El Pais) to remove the articles, Dorothy Chou, Google senior policy analyst, said. Google refused this request because “if publication is lawful then discovery is lawful”, Ms Chou said. The report period coincided with Spain’s general election last November.
An official Spanish request over information on corrupt behaviour which exposed the Catholic Church was also refused, she said.
Google received some 1,000 r equests between July to December 2011 from governments and their agencies for information removal from the search engine and i ts other sites ( such as YouTube and Blogger), according to the report. Each request can relate to hundreds of search results or YouTube videos. These included allegations of defamation, hate speech, pornography and political information.
Some 460 government requests were made by court order, the top three countries involved being Brazil, the US and Germany, with 68 per cent of requests granted. Some 540 government requests were informal, with the top three countries involved being India, South Korea and the US; 43 per cent of these were granted.
The Irish Government did not makes any requests for political information to be taken down.
When the company first released the transparency report in 2010 it hoped requests for removal of political information were “an aberration”, Ms Chou said. “Now we know it’s not.”
The conference on internet freedom runs in Dublin Castle until tomorrow and is organised by the Department of Foreign Affairs. Among issues discussed by international panels will be freedom of expression, freedom of the media, internet governance and human rights.
Previous StoryNext Story

''Warning Termination At Ryanair Could Effect Your Career In Aviation As All Airlines Ask For A 5 Year Work/Study record''..........
Posted by Europe's No 1 Anti Ryanair Campaigner John Foley.... at Sunday, June 17, 2012 No comments: Links to this post