Ryanair over the last week have seen 1 billion wiped off their share price which is great news to probationary cabin crew who continue to be exploited by Mr O,Leary.
With Ryanair being the largest airline giving out ZERO hour contracts to young cabin crew, Ryanair.s Michael O'Leary is conning the PAYE of probationary cabin crew in a big way..
As you can see below, Ryanair pilot group sent a open letter to Ryanair,s CEO Michael O'Leary on 30th January 2015 regarding the Irish taxation with no mention of the conning of PAYE with probationary Ryanair cabin crew who in many cases are paid a low monthly salary of  below £600.

I understand that Ryanair pilots are exploited in a very big way by Ryanair with many in thousands of £ of dept which will take years to pay off.What the Ryanair pilot group continue to ignore is the foul treatment their cabin crew colleagues are going through and need their help.
New recruited cabin crew are paying up to 42% PAYE rate to the Irish government.

Look at the PAYE charges below from Probationary cabin crew at Ryanair..This is going on each month lining David Bonderman and Michael O;Leary's pockets. 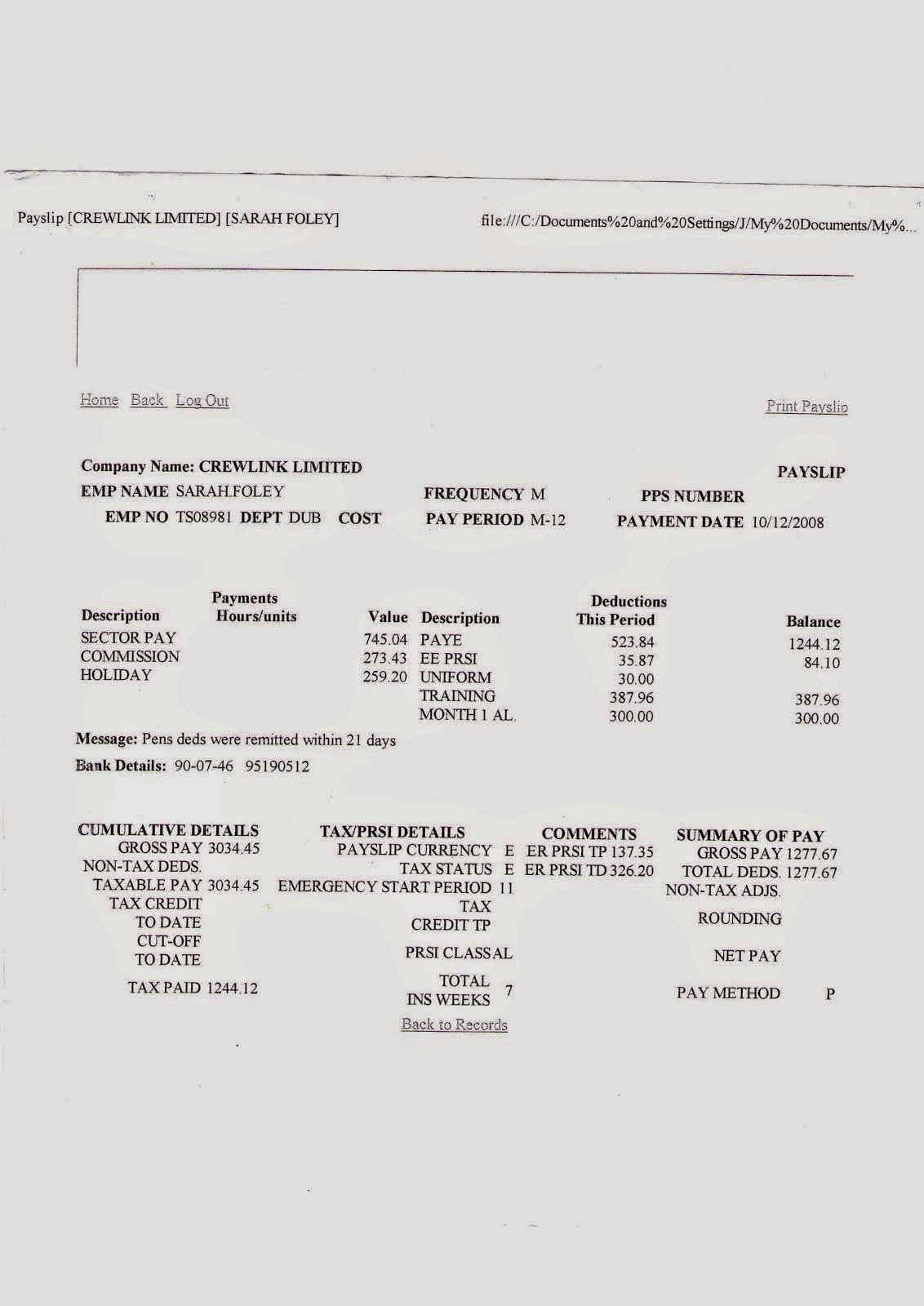 Irish Independent - 25 January 2015 talking to Ryanair,s Scum Bag CEO Michael O,Leary..
http://www.independent.ie/business/irish/irelands-personal-tax-regime-ludicrously-penal-on-young-people-ryanair-boss-michael-oleary-30934427.html
SCUM Bag Michael O'Leary's comments in the Independent below..
The salary at which the top rate of income tax kicks in - currently €33,800 - should be increased to €100,000, Mr O'Leary told the Sunday Independent.
"How are you meant to buy a house if you are hitting the top rate of tax - which when calculated with PRSI and USC is now around 55pc - at €34,000? That's not enough to allow you to buy a house or to even save to buy a house.
"I think that segment - and clearly that's where a lot of our people are, in the wage space between €34,000 and €100,000 - the fact that they are in the top rate of tax is a disgrace. I think the personal tax regime here in Ireland is far too penal.
"Not necessarily for rich people like me. . . but I think a much bigger issue here is the rate at which younger people hit the top rate of tax. If you're a single person in this country you hit the top rate of tax at around €34,000. That is a ludicrously penal tax regime.
"Far too much Government time is spent providing for the unemployed or the non-income earners . . . I think young people shouldn't hit the top rate of tax until you get to maybe income of €100,000."
The Ryanair boss joins a growing group of high-profile chief executives, many of them from multinationals, who have openly denounced Ireland's personal tax regime.
The American Chamber of Commerce has been particularly vocal on the issue.
Former AmCham president and PayPal Europe chief Louise Phelan has repeatedly described the current marginal rate as being too high and the level at which it applies as too low. The system is a disincentive for multi-nationals considering Ireland as a base, she said in 2014. 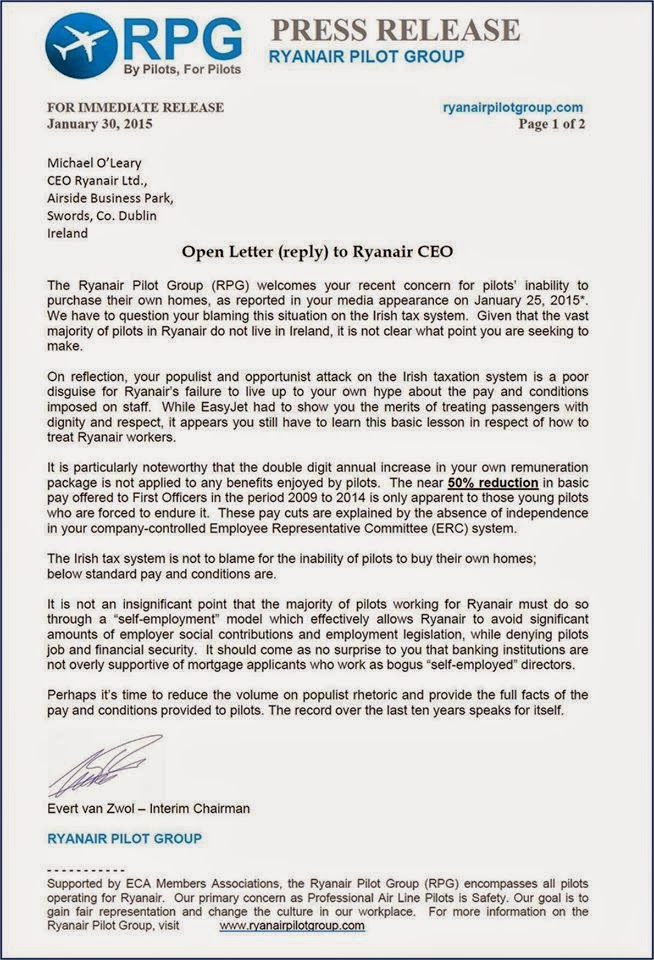 RYANAIR The Airline To BOYCOTT The Airline NOT To Trust On Safety
Posted by Europe's No 1 Anti Ryanair Campaigner John Foley.... at Saturday, February 07, 2015 No comments: Links to this post

Danish labour unions have made good on their threats against Ryanair and have told the budget airline that they will meet them in court.

The Danish Confederation of Trade Unions, LO, has filed a case in the Danish Labour Court (Arbejdsretten) to determine whether Ryanair should operate under Irish or Danish rules when it begins flying out of its new Copenhagen base.

You will see Ryanair scum bag Director of Personnel at Ryanair Eddie Wilson the TERMINATOR on the right below.Wilson is guilty of terminating thousands of probationary cabin crew for profit.. 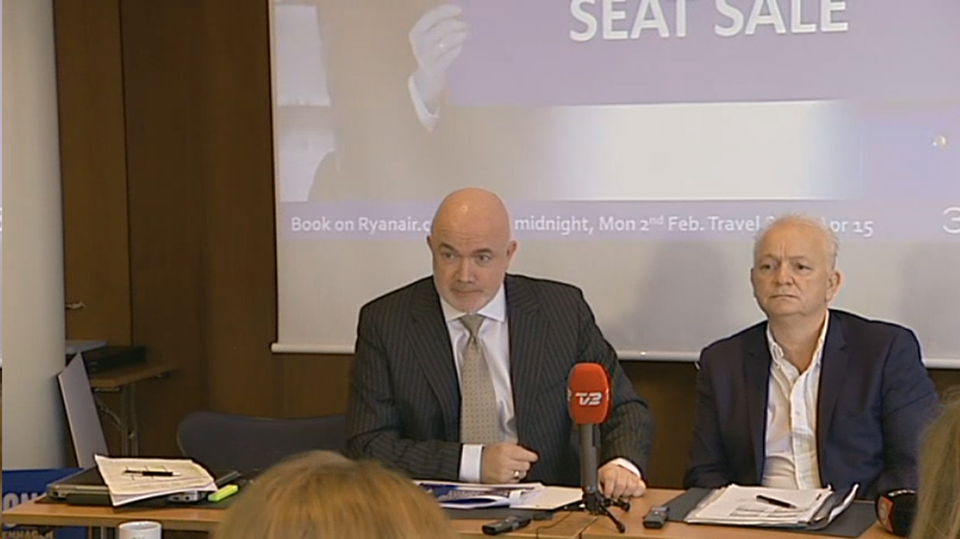