John said,
Protest 2 started at 8.45am on 4th July 2012 at Dublin International Airport..3 banners and 2 hand held signs were being displayed at the main entrance to the airport.
I was amazed how many cars sounded their horn in support of my protest.Even the Irish themselves hate Ryanair management.
At about 10.15am airport police arrived and this police officer came over to speak to me and asked what i was doing,could he not see it was a protest.........He informed me that i needed a permit to protest at the airport.Never been told that before,a permit maybe one more revenue for the Dublin Airport Authority..''were do i apply''. 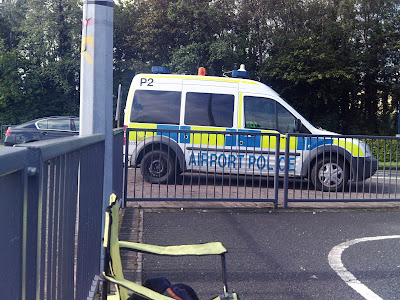 This officer waved and took off to which was a great site to see.I was okay to have this protest today so i thought.At 10.35am the arrival of two airport police cars,three officers and one dog division,So they were not happy with Ryanairdontcare Campaign's protest..One officer told me i was not allowed to be at Dublin airport protesting.I did inform the officer that i was standing on public land and not airport land to which he informed me that the banners were located on airport railings which was true..I pointed out to these 3 officers that  i would take the banners down and stand holding them on the public land i was standing on,which was my right so i thought,then section by-law blar blar blar was issued to me and not to return to Dublin airport within 24 hours otherwise i would be arrested.I asked could i take a photo of them to which they declined..Getting arrested for a Peaceful protest would not be right so i left within 30 mins..What was interesting was soon as i took the last banner down they all drove off even though i was still by the airport entrance for 30 more minutes as members of the public started talking to me about Ryanair....Looks like Mr O'Leary is  not a happy chappy with my banners which has the true information about exploitation at Ryanair.. As this protest was going to be all day, off i went to catch the 41 bus to Dublin City Centre for protest 3,

Off i went to the Irish Aviation Authority's head office,The Times Building,11-12 D'Olier Street in the center of Dublin.

Photos outside the Irish Aviation Authority 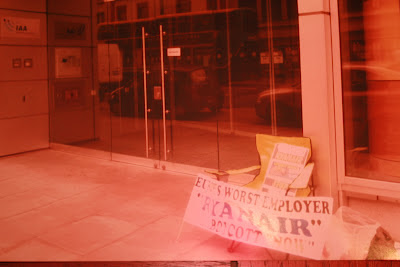 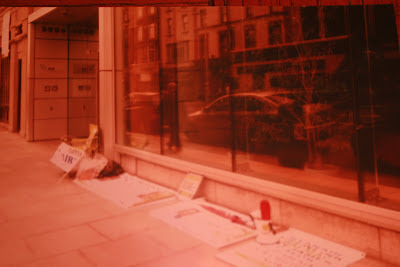 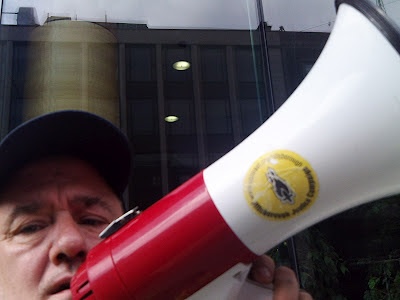 I arrived about 11.15am and set up the protest banners outside the main window for all to see.Mega phone in hand i started the protest.After about 1 hour three Garda police officers on foot and one Garda police car with two officers were upon me..Was this for real, five Garda police officers for one peaceful protester,???
no they were here because of the Ryanairdontcare Campaign's Banners..One Garda Sergeant O'Mara B65 who was not a friendly sort of guy,told me to remove the banners as they were an obstruction and the IAA had informed the Garda i was Harassing members of the staff at the IAA.
As Ryanair pilots will understand it will not be the first time the IAA have lied on a serious matter.How can a Authority so important as the Irish Aviation Authority lie to the Police in Dublin..If i thought the IAA had any credibility (which i don't) before this protests,it was all gone.
The Irish Aviation Authority have no credibility in the eyes of  Ryanair pilots and now Ryanairdontcare Campaign..A letter of complaint will be sent to the IAA and Garda regarding this harassment Lie....
After putting my point cross to Sergeant O'Mara B65 and informing him of a cctv camera above the main door to the IAA which will show i never Harassed IAA staff,  he ordered me under section  blar blar blar to leave the area and not return for 12 hours or face a 600 euro fine..I informed him i would leave and i would return the next day.....

Protest 4,
After leaving the IAA head office i walked a short distance to Leinster house which is were the Irish Government are based,as i arrived there were lots of  photographers taking pictures.
What happened here was quite astonishing.I held my ''Ryanair Worst Employer'' banner up and all the photographers rushed over to take a photo.I was interviewed by the press which was great and i thought it could not get any better but it did.
I had started the day getting removed from Dublin airport,then removed from IAA head office only to have met and talked to The Taoiseach who is the Prime Minister of Ireland Mr Enda Kenny .
Mr Kenny did listened to what i had to say and i gave him the Ryanairdontcare Campaign business card to which he thanked me for..I did also have longer to talk to Minister Phil Hogan who said he would pass my details on to the right minister..


Photos outside of the Irish Government office 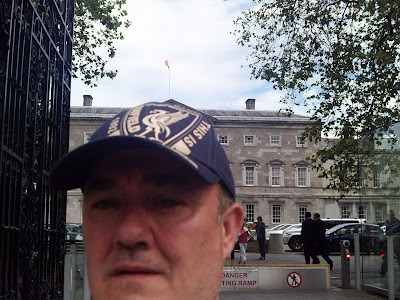 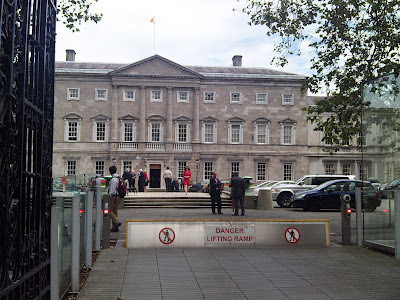 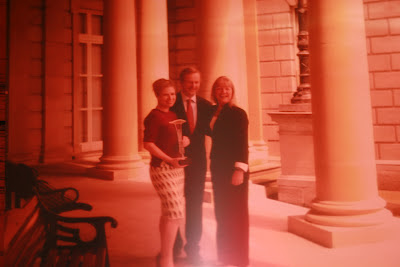 Photo i took from my phone of Taoiseach Mr Enda Kenny at Leinster house.

As Ryanair Management are viewing this Blog daily i can not blog what was say to Mr Kenny or Mr Hogan.
As you can see from the post above the day did not start well but i must say ended Brilliantly.....
A lesson learnt----Never Give Up----.

John said,
In 3 days in Dublin i managed to do 6 protests which were all GREAT....Sorry i missed you Michael !!!


I must start this post by saying please watch video below of a protest in 2011 outside Dalmac...


First Protest.
I arrived at 18 Main Street Rush at about 9.40am on 3rd July 2012 as Ryanair Cabin Crew training was about to take place and Dalmac were facilitating this training..These training students were from over 3 months of recruitment from Dalmac over the Internet.I can confirm 24 students starting this Ryanair Cabin Crew training on 3rd July 2012.This is great news as DALMAC recruited less than 3 students a week over the last 3 months..This same training was due to take place in May 2012 but was cancelled due to lack of students.
23 students were given the new wallet size Ryanairdontcare Campaign business card which directs them to this blog which is the biggest Anti Ryanair employment site available over the Internet.
The window blinds came down on Dalmac soon as i arrived. 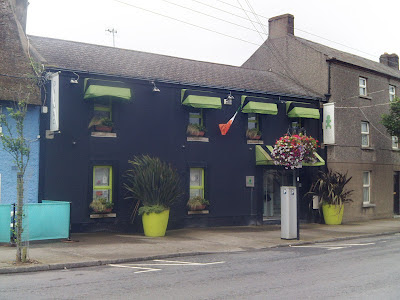 My protest lasted 4 hours with many locals stopping to talk to me with most saying they new about this scam..One person who i will keep anonymous stopped and talk to me for about 10 minutes and informed me that a friend had  problems with Dalmac over a training fee which was paid for Ryanair Cabin Crew Training to which this parent,who was Irish could see it was a scam being played out towards his child.
This person had asked for monies paid from him to be refunded to which Dalmac refused..A threat from this parent was made to Dalmac to burn their building down if a refund was not given...I must say gladly a refund was given by Dalmac..At last people are waking up to the Scam Anne McCrudden is involve in with Ryanair.
This person i must say had a legitimate business in Dalmac Language School but since 2004 when she got involved with exploiting young people with Ryanair in 2004 and setting up Workforce International,anything she involves herself or her family in since 2004 must not be trusted and investigated. 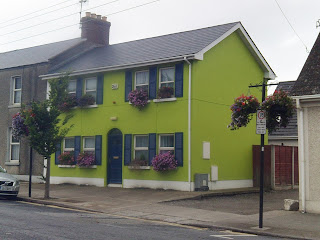 She is involved with St. Joseph's Secondary School were she has summer camps there  learning English. 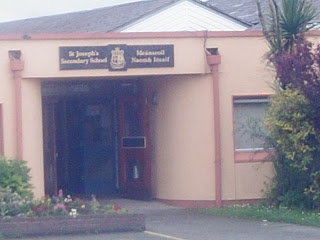 In Dalmac's building which is a front,they have religious artifacts to which is their way of showing honesty and young students entering this building would never believe they are being exploited so much for profit...With a 60% termination rate in the first 12 months of Probationary Ryanair Cabin Crew all paying Dalmac up to €3000
you can judge for yourself the honesty at Dalmac....

Personally i wish all students who are taking this Cabin Crew training the best of luck..My protest at Dalmac has no profist gained for me as Dalmac have PLENTY....
I left Dalmac at around 1.40pm and was watched and followed by a female staff member from Dalmac.
Day.


RECRUITMENT DOWN UK and IRELAND....''Doomed To Fail Michael''


Termination At Ryanair Will Effect Your Career In Aviation As
All Airlines Ask For A 5 Year Work/Study record.

RYANAIR Are CORRUPT...Bonderman and O'Leary ''DOOMED TO FAIL''..One FATHER One MISSION TRUTH....

Ryanairdontcare Campaign founder John Foley is at present in Dublin Ireland and has found out some very interesting information regarding recruitment of Probationary Cabin Crew which will be posted in days..

John said,
One fathers fight to get to the truth is a very long process when you are fighting a big company like Ryanair when you have corruption at the highest level inside of this company...
Doomed to Fail  ''Mr O'Leary''..................
Posted by Europe's No 1 Anti Ryanair Campaigner John Foley.... at Wednesday, July 04, 2012 No comments: Links to this post

Below is Crewlink Ireland Limited (who are Ryanair) on our Blog 3rd July 2012.