Below a parent of a Terminated Probationary Ryanair Cabin Crew made a comment yesterday on RyanairDontCare Campaign's BLOG which is shocking.Yet one more young student Exploited and young life wrecked by O'Leary and Bonderman for profit.

My daughter has also just been summoned to Dublin and when she got there was told she was a sales underachiever, when she challenged this as she was in the top 20 sales list they then stated she must have been late for work, again she challenged this and Crewlink/Ryanair couldn't provide dates of these alleged late shows and basically told her that her contract was terminated. Ryanair you are a disgrace. This is now being raised to our Scottish MSP, Mr John Foley I congratulated you on your mission and if I can Help from Scotland please contact me

John said,
I am personally very  sad to hear yet one more family abused by O'Leary and Bonderman...
My daughter Sarah was also given a reason for Termination on 26th November 2008 in Dublin... Crewlink/Ryanair told Sarah it was because of the recession and said she was not alone.This was a Lie from Ryanair scammers ( RyanairDontCare Campaign was born ) as they will say whatever they can at Termination but they never put recession in the Termination letter.
Soon as we complained the reason was alleged attendance issues which were altered by Ryanair.As the parent above will confirm they never provided alleged dates,complain and Ryanair will provide these alleged dates for sure.I took our complain to the door of Michael O'Leary in April 2011 in Dublin were a meeting took place after over 2 years. The Lies at this meeting were expected and Ryanair's O'Leary only agreed to this meeting as a way to stop my own Direct Action Protests and Peaceful Protest's against Ryanair.This failed ''Michael''. and will continue....Not only because of what Ryanair did to my child but to so many more.
As the No1 Anti Ryanair Campaigner '' Justice will prevail''.to gain a victory for all......

Posted by Europe's No 1 Anti Ryanair Campaigner John Foley.... at Saturday, November 12, 2011 No comments: Links to this post

Information has passed passed to RyanairDontCare Campaign saying David Bonderman TPG Capital  the CHIEF scammer at Ryanair has given a file to Top U.S Law firm Kelly Hart Hallman Attorneys in Law
in Fort Worth Texas.

John said,
Personal message to Bonderman,bring it on Exploiter...You are very wealthy but some things in life''are not for sale''You can not buy me and i am not scared of you. Protests will continue.
Your birthday on 27th RyanairDontCare Campaign has a nice surprise for you....''SCAMMER''
HAPPY BIRTHDAY DAVID.................................
Posted by Europe's No 1 Anti Ryanair Campaigner John Foley.... at Saturday, November 12, 2011 No comments: Links to this post

Morgan Stanley Financial Adviser to Ryanair and Coinside, Colm Donlon and Adrian Doyle
Telephone: +44 20 7425 5000
are very keen to look into  the Suicide of a Ryanair Pilot who had work related issues at Ryanair.
It is also said Darrell Hughes is looking into Liverpool Pilots regarding this suicide or looking to cover his own faults at Liverpool John Lennon Airport.
The true facts of this sad lose of a Real Important Pilot at Ryanair will be out soon.
O'Leary and Bonderman,your time is nearly up and RyanairDontCare Campaign have much more information than you would ever think.Did you ever think you could continue to abuse our children and get away with it.
Shareholders were all informed (i have the letters) and did not act,but justice will be won,share price will fall,

Posted by Europe's No 1 Anti Ryanair Campaigner John Foley.... at Friday, November 11, 2011 No comments: Links to this post

RYANAIR'SMICHAEL O'LEARY ARE YOU WATCHING OUR PUBLICITY..MORE TO FOLLOW AND WE ARE NOT SELLING ANYTHING...WORKING CLASS SELF ORGANISATION

John said,
The link below has some swear words not suitable for under 18 years of age...

Posted by Europe's No 1 Anti Ryanair Campaigner John Foley.... at Wednesday, November 09, 2011 No comments: Links to this post

Thursday 3rd November 2011 the court case for RyanairDontCare Campaign founder John Foley was held at Liverpool Magistrates Court in Liverpool.Charged with Aggravated Trespass with his DIRECT action Roof Top protest at John Lennon Airport against Ryanair, Europe's Greatest Exploiters of young people wishing to become cabin crew.
John Foley had pleaded Not Guilty at an earlier hearing and his case was heard by a Circuit Judge.
The Judge had made comments in open court about his personal feeling against Ryanair which he would not let cloud his judgement in this case.
The Judge showed sympathy towards John Foley's daughter as he looked through John Foley's police statement and one of the reasons this protest took place.After about 20 minutes the Judge turned to John Foley and said '''''''''' I find you NOT GUILTY '''''''''''
The Circuit Judge did point out how John must use other means to protest and not to put himself in danger,to which Foley thanked the Circuit Judge for his concern. 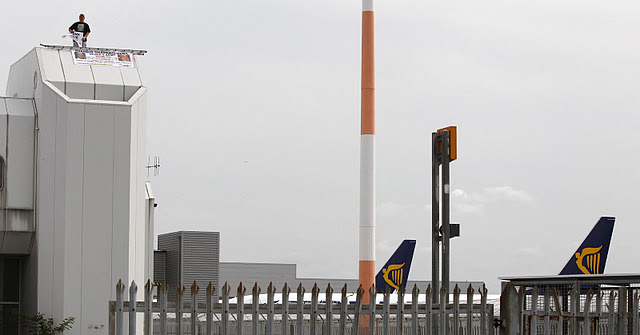 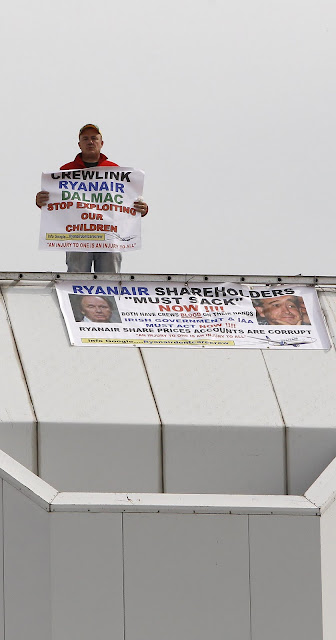 John said,
This is a great victor against Exploitation of young people at Ryanair...Michael O'leary continues to say  RyanairDontCare Campaign is ''doomed to fail''
RyanairDontCare Campaign is firmly out there and many young students wishing to become cabin crew are staying clear of Europe's Greatest Training Robbers ''RYANAIR'' which makes direct action protest a winner every time.
Peaceful and Direct Action protests will continue until O'Leary and Bonderman are sacked by the Shareholders.....
RyanairDontCare Campaign wishes to thank Solfed for all their support and words of encouragement.....
Posted by Europe's No 1 Anti Ryanair Campaigner John Foley.... at Monday, November 07, 2011 1 comment: Links to this post

RYANAIR EXPLOIT SO MANY YOUNG PEOPLE AS PROBATIONARY CABIN CREW AND USE YOUNG PEOPLE TO PROMOTE NEW MANCHESTER BASE.

Michael O'Leary has used dance with young people as a way to show the general public how caring they look towards young people.This is Bonderman and O'Leary being hypocrites yet again.
Michael O'Leary and David Bonderman are wrecking so many young people's lives as probationary cabin crew at Ryanair for PROFIT.Termination for PROFIT and left in  foreign lands to make their own way home,this is the true caring of Ryanair.
Termination of 18 to 22 year old, probationary cabin crew at Ryanair could be up to 60%,this shows the true caring of Ryanair's Bonderman & O'leary...

John Said,
It make me very sad to see Ryanair use young people to dance at the opening of the new base on 3rd November 2011 as a way to blanket their abuse of our children wishing to become cabin crew.
Shame on you Bonderman tpg capital & O'Leary ''the mouth''.
RyanairDontCare Campaign was there at Manchester Airport on 3rd November 2011 to ask O'Leary Questions on video but was told to leave the departures hall by armed police.
I would hope the General Public would see Ryanair as Exploiters of Young People and Boycott Europe's Greatest Training Robbers ''RYANAIR''.
As you can see the young students danced so well but were made to wear O'leary's face.This shows O'Leary's only interest is himself....If he is the  face of Ryanair i am the face of RyanairDontCare..
RyanairDontCare Campaign is not profit orientated in any way but orientated to get the word out of Recruitment for TERMINATION for Profit at RYANAIR...