Young people wishing a career as cabin crew need to understand why Ryanair have so many recruitment days..The more Ryanair recruit the more they TERMINATE...
Ryanair through so called third party providers,charging up to 3000 euro to train with Easyjet paying you to train.....
Do not be fooled by the experience factor at Ryanair because once you are Terminated by Ryanair your career in aviation will be damaged forever..Up to 60% of new recruits will be Terminated and it is rising.
Ryanair use the high turn over of cabin crew not only to exploit young workers but this is to maintain the profit machine on employees.

John said,
Young people wishing a career as cabin crew must look at Easyjet below plus go on the Easyjet forum asking questions about Ryanair.The reason why you should ask for advise on the Easyjet forum and not the Ryanair forum is simply....RYANAIR use cabin crew members to post on cabincrew.com forum and tell many lies to encourage young people to join....
Easyjet careers below.
http://www.easyjetcareers.com/careers-in-the-air/cabin-crew-careers/training.aspx

Ryanairdontcare Campaign have been sent this below from a probationary Ryanair cabin crew member who has left Europe's Greatest Exploiter Of Young People ''RYANAIR''. New recruits must look at this post before they decide to join Ryanair...Ryanairdontcare Campaign have been saying for 4 years safety is not priority at Ryanair....Priority is SALES SALES SALES.....
Times for us all to boycott Ryanair....

Ryanair Probationary Cabin Crew Member
--------------------------------------------
Just left ryanair I lasted a few months all I can say is what a joke of a company. First day I started everyone was speaking polish no one was prepared to speak English to me. The way in which the company treats you is disgusting all that is emphasised at flight briefs is sales, passenger safety does not appear to be an issue. Not once did I realise that cleaning toilets without gloves would be an issue. It also appears to me most of Ryanair cabin crew members are young, where is all the experience.
I was reporting to work at 5am and I eventually finished work and got home at 1600 same day and I was paid for 2hrs surely this is not legal. Not to mention if there are any issues on board there has to be a report made which may take a further hour in the crew room which is again unpaid.
many issues have resulted in me leaving.
Word to all Ryanair cabin crew leave while you can, the contracts which are now given offer less that minimum wage, it just exploits, Michael o'leary doesn't care as once said cabin crew are like lemons, squeeze them for what you can get.
John said,
I hope young people wishing a career as cabin crew will take  note of these words above and not join Ryanair who abuse and wreck so many young lives for profit.....TERMINATION of new recruits at Ryanair is  the largest in aviation world wide....
O'Leary and Bonderman are ''SCUM''..............
Posted by Europe's No 1 Anti Ryanair Campaigner John Foley.... at Saturday, November 03, 2012 1 comment: Links to this post

Ryanair Europe's most exploited airline not only treat passengers bad they wreck the lives of young probationary cabin crew for profit.See the article below..
http://www.dailymail.co.uk/news/article-2226185/Ryanair-order-Spanish-police-remove-woman-flight-wrong-type-hand-luggage.html?ito=feeds-newsxml

All should boycott this airline who have no dignity or respect for their own crew...
Suicide of a Ryanair pilot was hushed up and the main stream media not only let the pilot down but let us all down...


Posted by Europe's No 1 Anti Ryanair Campaigner John Foley.... at Friday, November 02, 2012 No comments: Links to this post

Ryanairdontcare Campaign can confirm Ryanair have stopped Cavok from recruiting young people to scam as probationary cabin crew....The reason being Cavok's recruitment numbers in Portugal  have fallen over the last year thanks to Ryanairdontcare Campaign leading to lower numbers of young people falling for the Ryanair recruitment for termination SCAM in Portugal and Spain.
As you can see from the post below on the Ryanair website www.cavok.cat is not listed as it was a few months ago...As you can see recently Ryanair have mentioned an unblemished 28 year safety record due to the fact that Ryanair are the only European airline to ever have had 3 may day calls in the very same day due to low fuel.....Not only are crew exploited but safety on-board is not priority at Ryanair....

Are you bored of nine-to-five? Want something different? Want a career that will get you places? How about a job that gives you wings?
Our Cabin Crew service providers are currently recruiting for exciting Cabin Crew positions operating on Ryanair aircraft.
Ryanair is Europe's only ultra-low cost airline, operating more than 1,500 flights per day (over 500,000 per year) from 51 bases and 1,500 low fare routes across 28 countries, connecting 170 destinations. Ryanair operates a fleet of 298 new Boeing 737-800 aircraft with firm orders for a further 7 new aircraft (before taking account of planned disposals), which will be delivered by the end of 2012. Regulated by the Irish Aviation Authority, Ryanair currently has a team of more than 8,500 people, expects to carry over 79 million passengers in the current fiscal year (ending 31 Mar 2013) and has an unblemished 28-year safety record..
For information regarding open days throughout the UK and Europe please consult the following websites:
Requirements 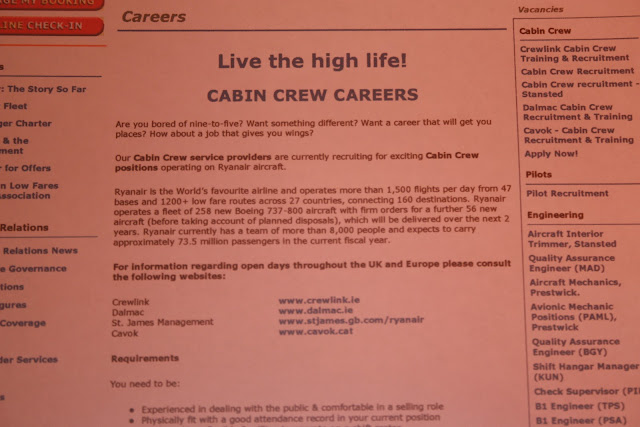 We Must Point Out
TERMINATION AT RYANAIR WILL DAMAGE YOUR CAREER IN AVIATION.Termination of new recruits in the first 12 months is 60% at Ryanair...Easyjet have a Termination rate of 12% of new recruits.
Posted by Europe's No 1 Anti Ryanair Campaigner John Foley.... at Tuesday, October 30, 2012 1 comment: Links to this post