Ryanair have been busy..

Posted by Europe's No 1 Anti Ryanair Campaigner John Foley.... at Saturday, February 27, 2016 No comments: Links to this post

Ryanair DALMAC launches drive to recruit hundreds of cabin crew in Ireland.BUT IT IS A SCAM.

Dalmac in Rush Ireland are one of the shell companies Ryanair use to exploit young people to become cabin crew.Dalmac have paid the Irish Independent a fee for this editorial below.The young people in Ireland need to stay clear of Dalmac,Crewlink and Ryanair.
http://www.independent.ie/life/travel/travel-news/ryanair-launches-drive-to-recruit-hundreds-of-cabin-crew-in-ireland-34491209.html
Posted by Europe's No 1 Anti Ryanair Campaigner John Foley.... at Saturday, February 27, 2016 No comments: Links to this post

You can see below the letter off Ryanair's CEO Michael O'Leary sent by his assistant in reply to my letter dated 9th February 2016. 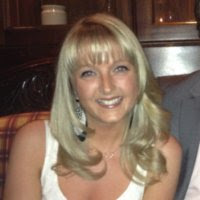 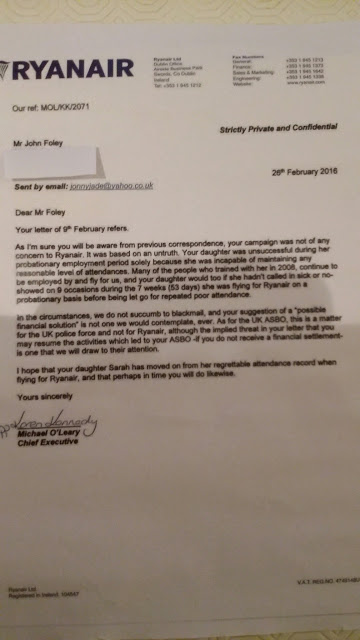 Ryanair's CEO Michael O'Leary talking about MANY cabin crew still working at Ryanair from Sarah's recruitment group from 2008 which is a lie.
No details whatsoever is given by O'Leary regarding these MANY cabin crew which i have details of.
We can confirm to Ryanair that we at Ryanairdontcare have all contact emails from all 84 students that took training with Sarah,which was split into two groups. It is the very same Lie Ryanair use when they talk about their charity scratch card sales and donations which is also a SCAM..You can see below the email sent to all 84 students in 2008 by Ryanair's shell company St James Management who was closed down in 2014 after Ryanairdontcare Campaign exposed the Ryanair cabin crew apprenticeship scam involving £10 million.See below.
http://ryanairdontcarecrew.blogspot.co.uk/2014/03/ryanair-exploit-apprenticeshipcabin.html

Email sent to all 84 students in 2008 by Ryanair's shell company St James Management ..

From today your letter is available at the Training School here in Bishops Stortford. This letter will allow you to get a travel card for use around Stansted at the discounted rates normally offered to people who work at the airport.

Please contact the Travel Card Office on 01279663322 who are bases on the ground floor of Enterprise House, to make an appointment. When you attend this appointment you need to collect the letter from the Training School first.

You should all think about doing this course before the course starts as the Travel Card normally takes a few days to come through to you.

RYANAIRDONTCARE CAMPAIGN made St James Management close down in 2014 which was a concern for Ryanair do you not think Mr O'Leary. 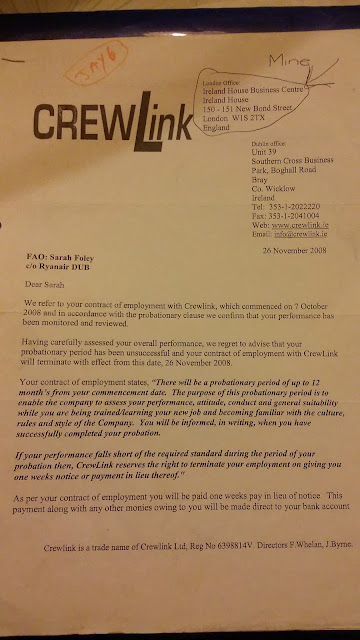 In 2009 the protests started and one which was close to my heart was the second at St James Management.A roof top protest which was the second covered by a local newspaper in Bishop Stortford (Stansted). St James Management had started one of their training SCAMS so i decided to take action to inform students of this scam by Ryanair.
Look at the article below which made my day. 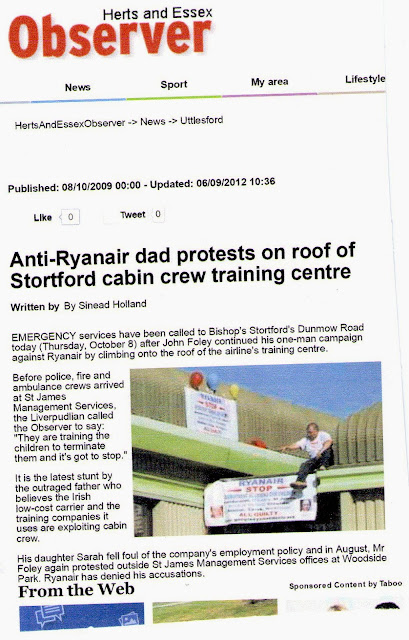 The letter below took me 12 months to get my hands on and Ryanair's Michael O'Leary was not happy with the bad publicity even though the Observer is a local newspaper,it covers Statsted airport which is Ryanar's main UK airport.Would loved to have seen O'Leary's face seeing this story break.As you can see the occasions of late,sick and no show are 8 not 9. 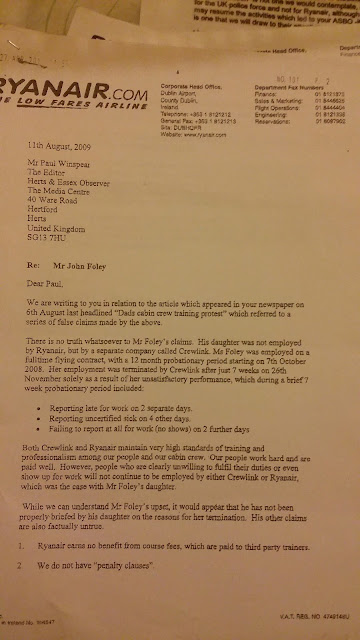 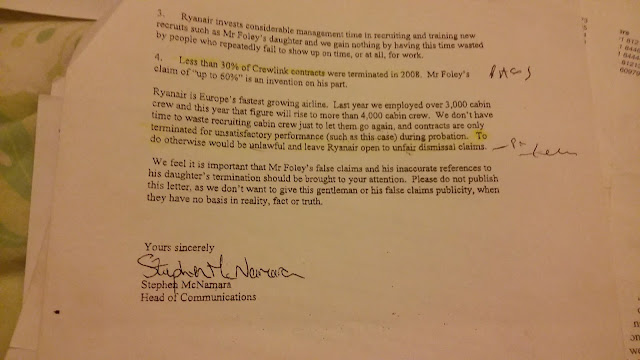 Stephen McNamara is one more scum bad that worked at Ryanair.He dealt with the press and now works at Irish Rugby.As you can see he clearly (lies) states 30% of Crewlink cabin crew contracts were terminated in 2008 which is a third of their cabin crew workforce(but it is 60%).The more Ryanair recruited the more were terminated.We called it recruitment for termination.This high level of termination of cabin crew at Ryanair is controlled by the per hour rate of pay SCAM which generates multi £ millions each month.Ryanair will not be open to unfair dismissal claims because Ryanair use this shell company Crewlink to contract these young cabin crew and in Ireland the employment legislation is in place so that you need to be working for a 12 month period if you wish to claim unfair dismissal to which Ryanair exploit.So as you can see it is WIN WIN for Ryanair.

One of the many letters from Michael O'Leary which states 8 occasions of late,sick and no shows. 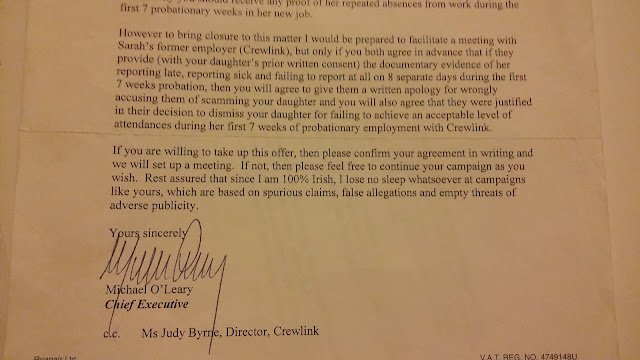 The letter below regarding a meeting with O'Leary and Crewlink. I am the only parent to have a one to one with these scum bags over the Ryanair recruitment scamming.The letter was sent by a Darrell Hughes who one more scum bag at Ryanair.He was involved in the exploitation of pilots at Liverpool John Lennon Airport were Ryanair pilot Paul Ridgard committed suicide.Google RYANAIR PILOT PAUL RIDGARD,,, 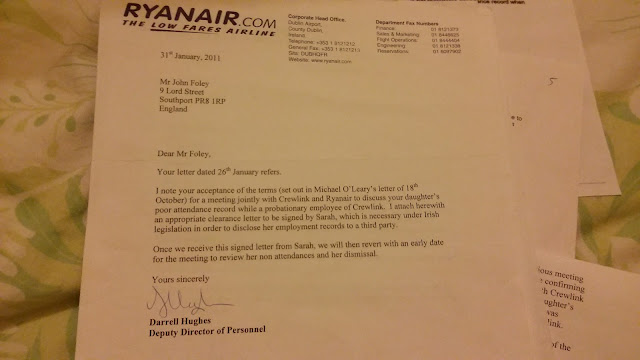 See video below when i confronted Darrell Hughes over Paul Ridgard's death.

Letter below from Michael O'Leary states 9 occasions of late,sick and no shows. 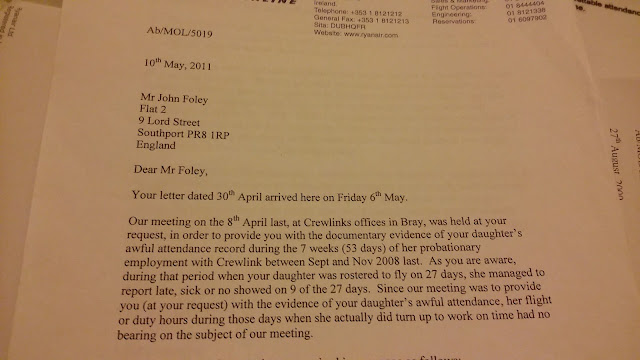 Posted by Europe's No 1 Anti Ryanair Campaigner John Foley.... at Saturday, February 27, 2016 No comments: Links to this post