EDREAMS SELLING ALL FLIGHTS THROUGH GOOGLE..RYANAIR Not HAPPY LOOSING SUBSIDY.


As you can see below edreams have paid Google to place an advert on the first page of Ryanair on google.Ryanair are very concerned but not for the reasons Ryanair are telling you.Ryanair believe this post below is misleading which is NOT true.It is clear edreams are running this site.Take a look at the edreams selling Easyjet flights
http://www.edreams.co.uk/flights/airline/U2/easyjet/?mktportal=google&gclid=COLQvavxusgCFaEfwwodHPkA9w
eDreams is perfectly entitled to sell Ryanair tickets, and the tickets of other airlines providing customers with much-needed choice and variety to the flight distribution market.What Ryanair don't like is the fact that under their subsidy contracts with airports and cities Ryanair are paid on the numbers of passengers numbers they bring to these cities and edreams are taking a chunk of these profits.That is business Mr O'Leary which is great for the customer but NOT for your subsidy payment.
At least edreams are giving their employees REAL contracts of employment as Ryanair contracts of their cabin crew are done through a SHELL company Crewlink Ireland who continue to exploit their cabin crew workforce... 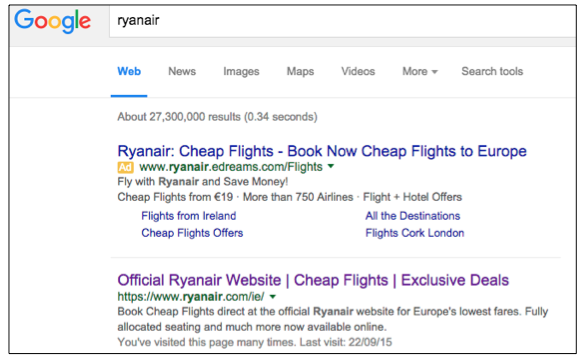 Wednesday the 23rd September Ryanairdontcare Campaign founder John Foley set off from Liverpool to Dublin like he does this time every year for the past five, to protest outside the Ryanair Annual General Meeting with regards to Ryanair's recruitment and high termination rate of young probationary cabin crew all paying up to £3000 to train.A bus and ferry crossing to Dublin is the chosen route which takes eight hours.
What was very pleasing this year was the fact that Ryanair had changed the location of the AGM from their new head office in swords to the radisson hotel at Dublin airport.
This change of location must have cost Ryanair a tidy sum which is great news.
In 2014 Ryanair left their old head office at Dublin airport for the new Ryanair head office in swords which was a great setting and saved Ryanair a tidy sum of money in 2014 but not in 2015 as Michael O'Leary thought. 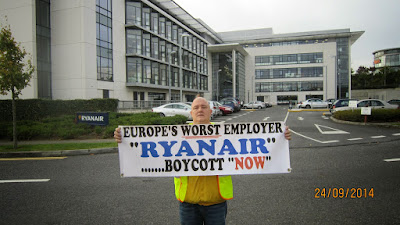 Protest Videos below outside the RyanairAGM in 2014 at their new office.


2014 was a great year for Ryanairdontcare Campaign.It was the first time a peaceful protest was allowed to take place outside of Ryanair's head office as the AGM took place inside.Ryanair would always use the radisson hotel at Dublin airport and it benefited Ryanair because protests are not allowed in any part of the airport under a by-law.Soon as the airport police are called you have to leave or face arrest, which gives you not even enough time to get your banners out.See the 2010 Ryanair AGM protest at the radisson hotel main entrance below. 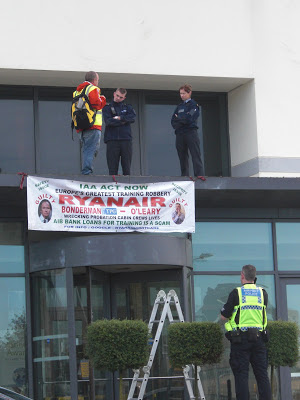 So in 2014 outside the new Ryanair AGM in swords the airport by-law could not be used so Ryanair employed many guards to keep Ryanairdontcare Campaign away from the main entrance which failed miserable.See videos above.
Ryanair called the Garda (Irish police) who told them to leave me alone and i could continue my peaceful protest.The BBC twitted our protest that day plus a camera man did a 30 minute interview outside.Ryanair's David Bonderman and Michael O'Leary were not very happy to see this protest being one of the best publicised in recent years.

In 2015 Ryanair decided to change the location of their AGM back to the radisson hotel because of the by-law stopping protests at the airport from  taking place,which failed miserable yet again..As i arrived at the AGM around 8,30am on 24th September 2015 i was greeted by a Ryanair manager and Two Ryanair security guards, one of which assaulted me twice before, once being a serious assault which he was never charged with instead i was arrested by the Garda (Irish police) released with no charges two hours later.
Video below showing start of protest at Ryanair AGM 2015.
Sorry for the bad language but this Ryanair security guard with his mate has assaulted me twice before at Ryanair AGM protests with one being a serious assault.


I was also approached by two Garda detectives (Irish police) and one airport police officer who talked to the Ryanair manager and his security guards and told me they had ask them to stay away from me and i was allowed to continue this peaceful protest outside the Ryanair AGM.It was a total shock that both sets of police agreed to let me continue this protest.You should have seen the face of the Ryanair manager and his security guards.(great sight)..The protest went on for 90 minutes and a share holder came outside to talk with me.He informed me that he had asked a question inside the AGM meeting, why was the very same protester for five years still protesting outside..BLOODY GREAT NEWS,after six years of campaigning in was talked about at the Ryanair AGM.


Second protest of the day was back at the new Ryanair head office in Swords.I was there for four hours and Michael O'Leary passed by without saying hello..

Ryanair manager greeting me.Decent guy just doing what he is told by Mr O'Leary.
If you know the name of this Ryanair employee below please comment anonymously below.Thank you.

The last 12 months has been a great year for Ryanairdontcare Campaign's blog www.ryanairdontcarecrew.blogspot.com which has been viewed 1,3 million times
helping young people to see the exploitation involved at Ryanair in their cabin crew recruitment.Ryanair through their shell company Crewlink Ireland have stepped up recruitment days in Europe with 43 taking place in July 2015.I would hope these increased recruitment days are a way in showing cabin crew recruitment levels at Ryanair are down.Campaign and protests will continue Mr O'Leary ''doomed to fail''...

John said,
On 20th June 2015 the British Daily Mirror run a story which was a third of a page with the headline Ryanairunfair which was a reference to this blog Ryanairdontcare.

The story was taken from this blog and spun by the Daily Mirror.I talked about this to the Ryanair manager in the video about,he commented that i was doing the work for the paper, any publicity is good publicity Mr O'Leary you know that..
Daily mirror report below.
http://www.mirror.co.uk/news/uk-news/ryanair-plane-unfair-charity-lotto-5920749