Ryanairdontcare Campaign can confirm a Protest took place on 16th July at 8.45am at the Radisson hotel Dublin airport were Ryanair were holding a shareholders meeting regarding the Boeing aircraft deal.

This is not the first time Ryanairdontcare Campaign targeted these meetings for peaceful protest against Ryanair's exploitation of young probationary cabin crew and it was not the first time Ryanairdontcare Campaign's founder John Foley was assaulted by either the Radisson Blu Hotel Dublin Airport..We can confirm that at least John Foley was not arrested as he was in 2011,kept in a police cell with no charges being made.John seems to have told the Garda of his rights as a peaceful protester which should not involve a police arrest.You can see the letter's sent to Sergeant Damian Kerins  from Garda H District,Dublin Airport and the manager of the Radisson Blu Hotel... 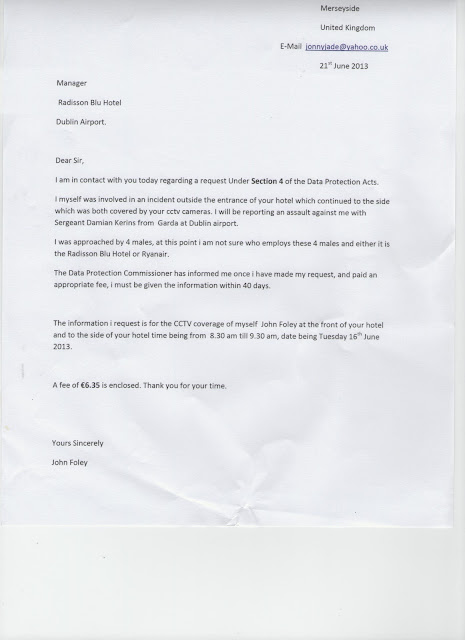 I am in contact with you today regarding an incident outside the entrance of the Radisson Blu Hotel which continued to the side of the hotel. I wish to report an assault against me .This accident happened on 16th June 2013 between 8.30 am / 9.30 am. I was approached by 4 males, at this point i am not sure who these 4 males work for, either it is the Radisson Blu Hotel or Ryanair.
No form of identification was worn by these 4 males to their identity which i could see, job description or any verbal confirmation on who these 4 males were.
I have requested the CCTV video recording of this incident from the Manager of Radisson Blu Hotel under the Data Protection Act Section 4.

I also wish to request information from you regarding the security personal who were on duty at this Ryanair shareholders meeting , are these security personal employed by the Radisson Blu Hotel ,Ryanair or any other company not as yet mentioned.
As you are aware you have kept my Flip Video Camera which contains some of the footage i personally took for my own protection, this footage i must request a copy from you please.

What is also of concern to me is the impartiality i feel the Garda is not, to this peaceful protest
which you are aware, relates to Ryanair’s continues exploitation of thousands of young people not only in Ireland but all over Europe.
I saw an officer of the Garda or the Airport police speaking to a Ryanair personnel (who i have seen at Ryanair’s head office)when i was being held to the side of the hotel which proves to me the impartiality of my peaceful protest is not applied when it comes to protesting against Ryanair.
You Sergeant Kerins did ask me did i have a travel ban placed upon me which could only have been mentioned by this Ryanair  personnel  as the same being asked in UK on my last Ryanair peaceful protest.
I must finish by saying, over the last 2 years 3 major peaceful protests have taken place in Ireland,2 being at Dublin airport against Ryanair which have involved me being the victim of extreme force and assault in stopping this peaceful  protests and being arrested by yourself on one of these occasion. The other major peaceful protest was in 2011 against Dalmac a Ryanair recruiter in Rush were a motor vehicle mounted the public path, drove against me then drove over my foot, all being captured on cctv and on my own personal video which was reported and shown to the Garda in Skerries  ,with me giving a police statement still no action was taken against this person  or even an update from the Garda. The lack of any action being taken by the Garda to anything that relates to my Ryanair  peaceful protests ,were i am confronted with either extreme form or assault cannot and must not continue.
Thank you for your time.


John said,
Sergeant Damian Kerins took my own video camera by saying it may be used in evidence and under the same breath stated i will see what the Radisson want to do,. As you can see from these words alone Sergeant Damian Kerins is not impartial to my peaceful protest...
View the video below from Dalmac in Rush were a motor vehicle was used against me.

Posted by Europe's No 1 Anti Ryanair Campaigner John Foley.... at Saturday, June 22, 2013 No comments: Links to this post

Ryanairdontcare Campaign can confirm that Judy Byrne the person who fronts Crewlink Ireland Limited for Ryanair has won an Entrepreneurs Award for her work in recruiting thousands of young people wanting to become cabin crew.All being charge up to 3000 euro to train with up to 60% of new recruits TERMINATED under 12 months.
We can confirm Judy Byrne has her hand in TERMINATING over 10,000 young people for profit.
Crewlink was set up by Ryanair as a way to continue the hourly rate of pay scam used on probationary Ryanair cabin crew which generates up to £50 Million each year.

John said,
This award is a joke and give a thought please for the thousands of Terminated young people,lives wrecked by Judy Byrne Ryanair/Crewlink...

Go on the Awards Programme below.
http://www.wxnetwork.com/?w=top25  Page 11 and see what Exploiter Judy Byrne looks like.
Posted by Europe's No 1 Anti Ryanair Campaigner John Foley.... at Thursday, June 20, 2013 No comments: Links to this post

Ryanair's CHIEF EXPLOITER David Bonderman sold €10.6m worth of shares in the airline last week.As you can see Bonderman is not alone....Ryanair is a fine share price SCAM..
http://www.independent.ie/business/irish/bondermanlinked-trust-sells-106m-ryanair-shares-29352116.html 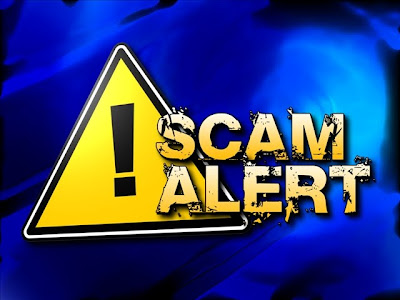 Pension money plugged into Ryanair, share price rise when O'Leary tell's the Lie to the press......Michael O'Leary uses the press as a tool to create higher share price...

Posted by Europe's No 1 Anti Ryanair Campaigner John Foley.... at Wednesday, June 19, 2013 No comments: Links to this post

Ryanairdontcare Campaign can confirm a Protest took place 8.45am at the Radisson hotel Dublin airport were Ryanair were holding a shareholders meeting regarding the Boeing aircraft deal.....


Photo below taken inside police car after the peaceful protest.. 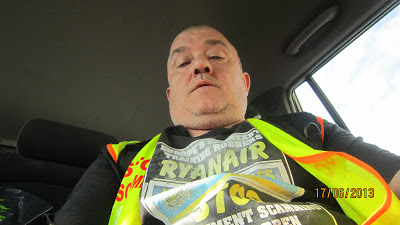 John said,
I can not go into to much detail  at present as a police investigation may be taking place regarding my report of assault.Sergeant Damian Kerins from Garda Siochana has taken my video camera as evidence but i will not hold my breath as the last time the Garda investigated a car being used against me to stop my peaceful protest outside Ryanair's recruitment in Rush ,video was also given to Garda  and they did nothing....See the video below and see if a crime has been committed against me.
https://www.youtube.com/watch?v=07glwX5eJCY
.I can confirm a protest took place outside the main entrance of the Radisson Dublin airport 18th June 2013  were around 20 shareholders were standing and listening ..I can confirm 4 Males confronted me at the entrance which lead to me being assaulted...Will this stop future protests in Dublin ''NOT A CHANCE'' Michael....

Look what Ryanair Management were looking at up to 24 hours before my protest...Still have you tracked ''MICHAEL''....Ryanair continued to look at this blog 3 times after protest to see what was posted....''HI Michael''....

Posted by Europe's No 1 Anti Ryanair Campaigner John Foley.... at Wednesday, June 19, 2013 No comments: Links to this post