Ryanairdontcare Campaign's report back in 2011 which confirmed Ryanair on-board policy of putting profit before SAFETY as a priority at Ryanair.Soon after this SAFETY breach was reported,with on-board photo's showing this SAFETY breach, Ryanairdontcare Campaign's first blog was closed down with in hours..The Irish Aviation Authority plus Boeing were informed of these Safety breaches by registered letter in 2011, with no action taken apart from the blog whistleblowing this information being closed down...
This shows you how money talks when it comes to Ryanair,Boeing,IAA and not forgetting the people owning the airports..
We as passengers believe falsely that airport authorities priority is the welfare of passengers which could be true in some parts of Europe but is simply not true in the United Kingdom..
Stanstead,Manchester and Liverpool's John Lennon airports are fully aware of Safety and serious {Ryanair} employment issues,which endangers passengers safety and has brought suicide of crew at Ryanair in 2011.
As well as safety of passengers being a priority the above should also make it a priority to take care of Pilots and Cabin Crew....
In 2011 Ryanairdontcare Campaign founder John Foley held many protests at airports in the UK highlighting the suicide of a Ryanair pilot and a protest outside a hotel in which Crewlink {who are Ryanair} were recruiting for cabin crew. John was approached at this protest by a Manchester airport police officer who attended a hotel earlier in 2011 with regards to this suicide and said Quote:just wanted to shake your hand John'' which clearly shows the Police at Manchester airport must be aware of the foul treatment Pilots and Cabin Crew go through on a daily bases at Ryanair.We were informed in 2011 that Ryanair's  DARRELL HUGHES Deputy Director of Personnel was very much involved at Liverpool John Lennon were the Pilot who took his own life was based..
John has met Mr Hughes and can confirm he is a SCUM BAG.You can see the YouTube video below.

You can see Ryanairdontcare Campaign in the Air Scoop report below on page 39,46 and 40.....

RYANAIR’S STRATEGY AIR SCOOP.... About on-board safety
:
In 2011, indications of disregard of regulations o
n-board Ryanair planes have
surfaced. It appears that some of Ryanair’s Boeing
737-800 are flying without all their carts
164
,
compromising the latching of carts stored in the ga
lleys. It also appears that crews do not always use
fire proof rubbish bags on carts and in the toilets
, which could result in a potential fire hazard dur
ing
a flight
165
. It is unclear whether these are occasional occurr
ences or the result of systematic cost-
cutting on part of the airline.


VERY BIG INFORMATION HAS BEEN GIVEN TO RYANAIRDONTCARE CAMPAIGN WHICH AT SOME POINT WILL BE POSTED HERE FIRST...''Watch this Space MICHAEL''.... ''Doomed To Fail''......... 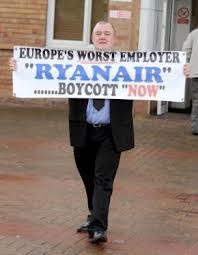 Photo outside court in 2012 in relation to StJames Management who are involved with Ryanair's policy of Recruitment for Termination which has wrecked the lives of thousands of young people all over Europe since 2004.
Posted by Europe's No 1 Anti Ryanair Campaigner John Foley.... at Saturday, September 21, 2013 No comments: Links to this post

RYANAIR TAKE StJAMES MANAGEMENT OFF THEIR WEBSITE SO NO CONNECTION WITH REGARDING RECRUITMENT SCAM..St JAMES STILL INVOLVED AND CONTINUE TO RECRUIT...INVESTIGATION IS NEEDED...

Ryanairdontcare Campaign are pleased to announce that John Mudge's StJames Management Services Limited have cut their ties will Ryanair's Recruitment for Termination on their website thanks to our campaign.
We can confirm that last year Cavok were removed from Ryanair's recruitment website...
In the last 12 months continues direct action protests and targeting these SCAM agents over the Internet has got  Ryanair worried...
We are pleased with this second agent St James Management being removed from the Ryanair employment site but must make sure the evidence of recruitment for termination to which StJames and Cavok have been involved in is kept by us...

As you can see below the persistence of Ryanairdontcare Campaign in targeting the above 2 Scam agents has worked, saving so many young people from loosing a lot of money plus wrecking their career in aviation...

Are you bored of nine-to-five? Want something different? Want a career that will get you places? How about a job that gives you wings?
Our Cabin Crew service providers are currently recruiting for exciting Cabin Crew positions operating on Ryanair aircraft.
Ryanair is Europe's only ultra-low cost airline, operating more than 1,500 flights per day (over 500,000 per year) from 57 bases and 1,500 low fare routes across 28 countries, connecting 178 destinations and operating a fleet of 305 new Boeing 737-800 aircraft. Regulated by the Irish Aviation Authority, Ryanair currently has a team of more than 8,500 people, will carry over 79 million passengers in the current fiscal year (ending 31 Mar 2013) and has an unblemished 28-year safety record.
For information regarding open days throughout the UK and Europe please consult the following websites: 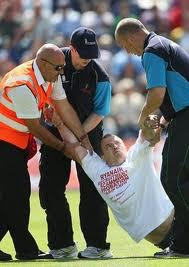 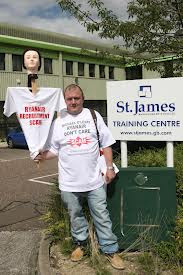 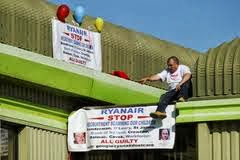 I have had a 6 year court order placed on me to stay away from the place above and not contact the senior management   at StJames Management ''JOHN MUDGE'' .....3 years left on this court order..
Posted by Europe's No 1 Anti Ryanair Campaigner John Foley.... at Friday, September 20, 2013 No comments: Links to this post

Portuguese student posted information regarding a company called Groundlink who are working together with Ryanair to get your money...
Promise to LIVE THE HIGH LIFE,which is a lie...
You can see the information below which was posted by a Portuguese student who is helping to spread the word ''RYANAIR RECRUITMENT For TERMINATION''...

Today I received an email from GroundLink to attend your English course for only 170euros, came with the account number and everything so that we can make the transfer to GroundLink as soon as possible. I began to think that this was a scam, and after all is the same, see: http://ryanairdontcarecrew.blogspot.pt/

I know you're all desperate to find employment, but quiet! If companies want to hire, only these is that potential employees should provide conditions for them to show their value and pay their specialized training in the area of activity of the company!
Posted by Europe's No 1 Anti Ryanair Campaigner John Foley.... at Friday, September 20, 2013 No comments: Links to this post 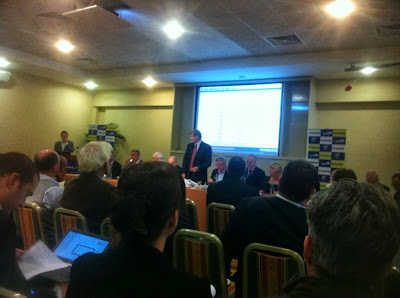 Today to celebrate Chief exploiter David Bonderman's absence from the Ryanair AGM in Dublin Ryanairdontcare Campaign have set up a Ryanair passenger blog were passengers can post their own personal stories of being cheated by Ryanair.
http://ryanairdontcarepassengers.blogspot.co.uk/

As you can see Ryanair were monitored on this blog today whilst their AGM was in progress..

Posted by Europe's No 1 Anti Ryanair Campaigner John Foley.... at Friday, September 20, 2013 No comments: Links to this post 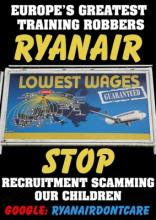 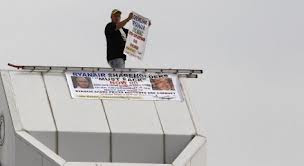 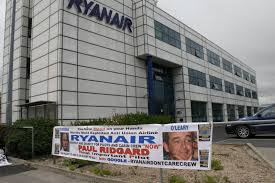 Ryanair Europe's Biggest Exploiter Of Young People are holding their Annual General Meeting at the Radisson Blu Hotel in Dublin airport on 20th September 2013..At this meeting David Bonderman and Michael O'Leary will offer share holders a special dividend for next year as a sweetener to stop them knocking at his door regarding the safety issues which have been televised in documentaries all over Europe.The last few months the Pilots and some Cabin Crew at Ryanair have started to join together in solidarity in their fight for better working conditions with safety being priority,which is great news.
Sadly Ryanair do not see it the same way and Michael O'Leary sees social media as a threat,not in telling us the true about safety but a threat to Ryanai'sr Share Price
Ryanair's bookings have fallen sharply as a result of their Pilots being televised in documentaries all over Europe telling us how safe Ryanair realy is.The fight back from Michael O'Leary is to sue bloggers on forums,closed down the Ryanair Pilot and Cabin Crew Facebook groups plus temporally closing down the Ryanair Pilot's twitter account and finally sending a strong message to Ryanair workers by terminating the contract of Veteran pilot Captain John Goss......
As many will be aware Ryanairdontcare Campaign's main focus is the Ryanair recruitment practises which clearly exploits young people all over Europe which is wrecking the start of their working life.Not only by using Zero Hour Contracts ON 80% of the Ryanair crew workforce but also making these young people work for FREE making David Bondeman & Michael O'Leary £ Millions each year which is placed in Banks off share.

In 2010 i did a roof top protest at this AGM .Radisson Blu Hotel Dublin Airport..http://ryanairdontcarecrew.blogspot.co.uk/2013/08/ryanair-exploit-cabin-crew-pilots-and.html

In 2011 i gained access with my protest banner to the room were the Ryanair AGM was held .Radisson Blu Hotel Dublin Airport and was assaulted by security guards in the hotel.Police were called and i was arrested and released after 2 hours.
I informed the Garda (police) about the assault and they did nothing.

In June this year Ryanair held a meeting regarding the Boeing aircraft deal at the Radisson Blu Hotel Dublin Airport and i again with my protest banner attended and was yet again assaulted outside of the hotel..This time the Garda (police) did not arrest me but asked me to accompany them to the police station,which i did and told them i wanted to report an assault.
Three months later still no assault statement taken...

I call on your help please with a COMMUNICATIONS BLOCKADE Telephone/Email/Fax against the Radisson Blu Hotel Dublin Airport on 20th September 2013 from 7am till 1pm.