Ryanairdontcare Campaign can confirm  a Ryanair flight from Leeds Bradford airport to Lanzarote asked for a priority landing as they were running low on fuel.The pilot did not radio a mayday call but did inform  Spanish air traffic control to make their landing priority..
It sounds like Ryanair management have warned pilots not to issue a mayday when it comes to Low fuel which will put lives at risk......The Irish IAA are not capable of going against Ryanair as 8 former Ryanair employees now work at the IAA which could make safety reports favorable to Ryanair..........
Yet again  Ryanair;s Stephen McNamara lied yet again... Report below.
http://news.ph.msn.com/business/ryanair-denies-new-low-fuel-landing-1


John said,
When will the aviation authority act and stop Ryanair putting profit before safety,do people need to die first ?????????????....
Radio interview regarding the 3 mayday calls below.As you can hear, Stephen McNamara at it again ''Lie after Lie''....
http://www.rte.ie/news/2012/0816/ryanair-spain.html#audio
Posted by Europe's No 1 Anti Ryanair Campaigner John Foley.... at Wednesday, September 05, 2012 No comments: Links to this post

Europe's greatest Exploiter of young people ''Ryanair'' is at it again,this time exploiting passengers for not having a boarding card....
We can confirm this is yet more exploitation that Ryanair continue to do not only to passengers but to probationary cabin crew.
When Ryanair's CEO's policy (Michael O'Leary) is to Not Feed or Allow Drinking Water for Cabin Crew on board at 38,000ft unless they pay ''say's it all''. Not only a SCUM airline to work for but also  SCUM Management....Look at what Ryanair's Michael O'Leary SCUM did to a Pilot who was fighting for cabin crew http://blogs.mirror.co.uk/investigations/2011/03/ryanair-pilot-sacked-for-handi.html
All you passengers who love flying on the cheap please remember how SAFE Ryanair are....3 Maydays in one day as a direct result of LOW FUEL....Ryanair saving money the Ryanair way....Mirror report below.
http://www.mirror.co.uk/money/city-news/ryanair-boss-michael-oleary-rant-1304334

PROFIT BEFORE SAFETY AT 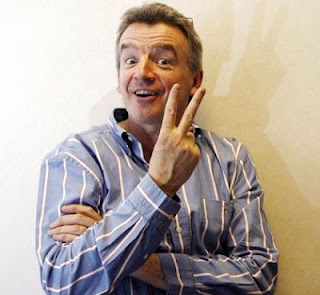 Protests Ryanair do not want you to see below..


John said,
I have met O'Leary and he is SCUM.....Next protest Ryanair's AGM Dublin airport Radisson Hotel 21st September 9am, bring it on ''MICHAEL''.

All above are recruitment scamming young people all over Europe...Charging a training fee of up to 3000 euro to train as probationary cabin crew at Ryanair,with up to 60% of new recruits terminated under 12 months before any legal protection is in place.In 2008 up to 200 young people a month were terminated for profit,attendance issues put in place by Ryanair.See Mirror report from 2008 http://blogs.mirror.co.uk/investigations/2008/09/ryanair-cabin-crew-left-in-tea.html
Once Terminated young probationary cabin crew are left abroad,penniless with no way home all thanks to Ryanair's EXPLOITATION...Lives are damaged forever with some young people contemplating  suicide....

TIME TO WAKE UP AND BOYCOTT RYANAIR ''NOW''.

Once you are Terminated your career in

aviation is damaged forever.Who will employ a cabin crew

student who has been Terminated by Ryanair

Ryanairdontcare Campaign set up protest outside Dalmac in Rush on 14th and 15th August 2012 were Ryanair were recruiting students wishing to become cabin crew.
Ryanair through Dalmac set up a 3 day event which has never been done before.Maybe the impact of the Ryanairdontcare Campaign's has hit recruitment at Ryanair.''GREAT''.
Many young people wishing a career in aviation are now aware of the exploitation of Europe's biggest TERMINATOR of probationary cabin crew ''Ryanair ''.

Tuesday 14th August saw 34 students attend the Ryanair recruitment drive in Dublin with some being accompanied by their parents.Four parents came over  asking for information about Ryanairdontcare Campaign which we were happy to supply..
One parent had informed us that they had travelled from the UK to Dublin the day before as their child was keen to join Ryanair..I pointed out that Ryanair were holding a recruitment day in Stansted on 14th August and thought it may have been better for them to attend.They inform Ryanairdontcare Campaign that Ryanair/Dalmac had inform them that there was no recruitment date set in the UK for August which was clearly a LIE....We can confirm that 4 return flights on Ryanair to Dublin for this recruitment cost this parent  £200.....Now we know why Ryanair scammers said there was no recruitment in the UK in August ''Flight Sales''.
After talking with these parents about Ryanair's policy of Recruitment for Termination they said thank you and were happy to take a Ryanairdontcare Campaign business card...

Wednesday 15th August saw 38 students attend the second day of the Ryanair recruitment drive in Dublin with at least 1 student walking out..We can confirm this student (name withheld) had a 15 minute talk to Ryanairdontcare Campaign.
Within 40 minutes of this student walking out of the Ryanair recruitment the Irish police (GARDA) were called by Dalmac to put a stop to this Ryanairdontcare Protest as it was clearly effecting Ryanair's recruitment..Dalmac has stated to police i was harassing the students going into the building which was yet more Lies used in an attempt to end this protest.Garda were informed before entering Dalmac by John Foley,founder and protester of Ryanairdontcare Campaign that CCTV used by Dalmac would clearly show this lie.
After a 20 minutes period the Garda left Dalmac and informed John Foley that the protest could continue.
Ryanair tried again to end our peaceful protests with lies which failed miserably.Ryanair use the very same tactic when Ryanairdontcare Campaign's protests take place at their head office which is based at Dublin airport.
Video's below of the 2 day protests at Ryanair/Dalmac ....ENJOY ....

Ryanair Exploiters head office.
At 1.32 min you will see Ryanair deputy supervisor Elaine O'Brien through the window.She was telling off two probationary cabin crew..This evil woman asked my daughter to resign knowing her Termination was eminent.A fee of 200 euro is paid once you resign.....Even more Profit from Termination...You can also see Elaine O'Brien who pretends to be a cabin crew member in one of the Ryanair charity calendar...


Rear of Dalmac in Rush


Outside Dalmac Protest to continue after Ryanair's lie


Make sure they can hear Ryanairdontcare Campaign.

Ryanairdontcare Campaign can finally give details regarding the ASBO hearing in Liverpool against Ryanair's No 1 Campaigner John Foley who has been fighting Ryanair Management for nearly 4 years.
This ASBO case took 6 months to be completed as Ryanairdontcare Campaign was still active and Merseyside police wanted to show the court how ACTIVE by gathering protest information..
Ryanairdontcare Campaign must point out,at no point did this Campaign STOP.....
We can confirm Merseyside Police did apoligise to John after the court case saying he must not take this ASBO personally as it was done to stop protests against Ryanair which were a strain on police recourse as John was very active.We can confirm Merseyside Police do recognise Ryanairdontcare Campaign as an employment campaign against Ryanair.
Merseyside police did use an informants Lies, guaranteeing a ASBO against John.Details regarding this informants witness statement will be place on this blog to show how the Police use Lies to get their way in court.....
Over the next two weeks court and police papers will be posted on this blog which will show how committed the Ryanairdontcare Campaign is and will continue to do so in fighting Ryanair's Michael O'Leary and David Bonderman's Exploitation of young probationary cabin crew at Ryanair to which John Foley's daughter Sarah felt foul to in 2008....


John said,
HELP FROM IRISH ACTIVISTS Welcome.... ryanairdontcare@yahoo.co.uk
AGM ''RYANAIR SCUM''. September 21, 2012 at 9.00 a.m. at The Radisson Blu Hotel, Dublin Airport,
RYANAIRDONTCARE CAMPAIGN In attendance Mr David Bonderman and Mr Michael O'Leary............
A Roof protest took place in 2010 AGM....
I was assaulted AGM in 2011 by your guards as you had tried so hard in stopping Ryanairdontcare Campaign from entering the room were the AGM meeting took place,as you are aware David & Michael i achieved my goal and your guards were ''Doomed To Fail'' as they will be AGM 2012....
See you soon Exploiters.....

Photo of Ryanairdontcare Campaign's Protests which was placed on a DVD by Merseyside Police...20% of this Video shows EFC and Manchester City protest and the John Lennon Airport roof protest..80% was taken from this blog and Ryanairdontcare's  Youtube channel. Recruitment for Termination is the policy of Ryanair as shown in this DVD..

We can confirm that Ryanairtv.co.uk domain is owned by Ryanairdontcare

management which will be added to Ryanairtv.co.uk 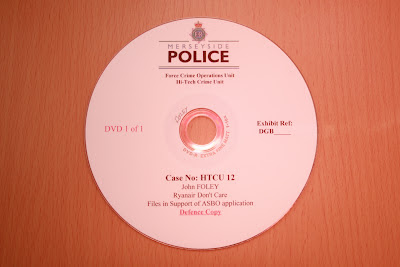