John said,
It has been six years since i started my campaign against Ryanair who are Europe,s largest Low Cost airline.On 26th November 2008 my 18 year old daughter Sarah was terminated by a so called third party provider of cabin crew for Ryanair CREWLINK.
Crewlink and Workforce International in name at present are used to recruit young people all over Europe to become cabin crew at Ryanair.St James Management Services run by John Mudge was the no1 recruiter in the UK for Ryanair which closed down in 2013,not before making £millions with M2 Training through  Ryanair apprenticeship funding from the UK government.


Workforce International is run by the McCrudden family's company Dalmac,main street Rush in Ireland.Anne McCrudden is involved with Rush council and owns a STREET in Rush Ireland were she runs Fingal Language Institute,Dalmac and Workforce International.With £millions of profit coming from Ryanair each year through exploitation/termination of young cabin crew most being from Europe.
http://ryanairdontcarecrew.blogspot.co.uk/2012/07/anne-mccrudden-dalmac-recruitment-rush.html

Crewlink is run by Judy Byrne and Frank Whelan in Bray Co Wicklow Ireland.These are the big hitters when it comes to the £millions of profit coming through Ryanair each year off the exploitation and Termination of thousands of young cabin crew.With a turnover of 50+£million in 2012 going up each year 30% guess whose lining their pocket .. 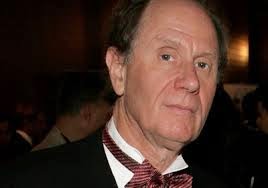 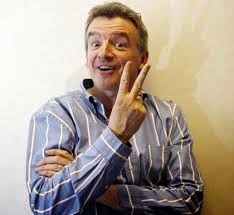 I have had three major protests which where televised on national TV. These protests took place to highlight the abuse cabin crew are put through by Ryanair.The aim was to get a high profile on Google so that many young people wishing to become cabin crew would see how bad Ryanair are. JOB DONE...

Posted by Europe's No 1 Anti Ryanair Campaigner John Foley.... at Wednesday, November 26, 2014 No comments: Links to this post 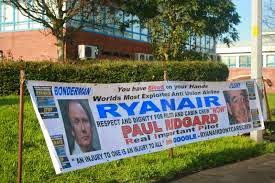 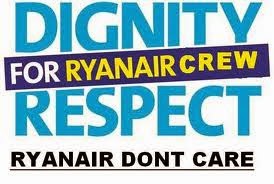 DOOMED TO FAIL Mr O'LEARY....
Posted by Europe's No 1 Anti Ryanair Campaigner John Foley.... at Tuesday, November 25, 2014 No comments: Links to this post