RYANAIR/CREWLINK WHAT IS YOUR TERMINATION % OF PROBATIONARY CABIN CREW ???...THE BIGGEST IN EUROPE IF NOT WORLD WIDE....60%......

Today at Bewleys Hotel in Manchester Airport, Ryanair Scammers and so called third party Scammers Crewlink had an assessment day..Guess what, RyanairDontCare Campaign were also there.
It was an early start for Ryanair/Crewlink and about 80 to 100 students turned up....
I went inside the hotel and found the crewlink room were the scammers were talking to students..I decided not to gate crash into the room as my aim was to distribute leaflets to as many as i could..(leaflet below) On 19th December 2008 at the radisson hotel Stansted,i did enter the room were StJames Management Scammers were having their assessment day to distribute leaflets which were grabbed by management so students could not read them.

I gave out 60 leaflets as students were waiting for a one to one interview with the scammers.
I informed students i would be standing outside of the hotel if they wanted to ask any questions.
As you can imagine many came out to talk with me and ask questions about our RyanairDontCare Campaign.Four students left the hotel premises after talking to me which was a great feeling.I never told them NOT to join Ryanair Europe's Greatest Training Robbers,just informed them to look at our sites and then decide if they wish to be Probationary Cabin Crew at Ryanair.;
Two other students came outside after they had their one to one interview and said,i was more believable than Ryanair/Crewlink and they will not be joining Ryanair.
After being at the hotel for 6 hours,Crewlink saw me outside and informed the hotel who called the police.
Not sure why the police were called ,O yes Ryanair not being able to Exploit all students today because of RyanairDontCare Campaign.Police took my details and left.
RyanairDontCare Campaign has no financial gain from today but Ryanair do.
As Michael O'Leary keeps saying, RyanairDontCare Campaign is ''DOOMED to FAIL '' are you sure Michael !!!!!!!!!!!!
Great victory for all Terminated Probationary Cabin Crew today.... 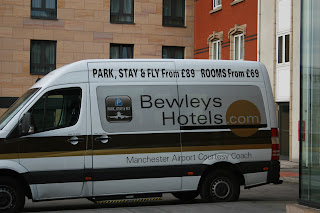 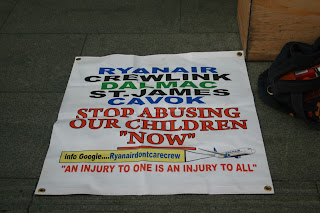 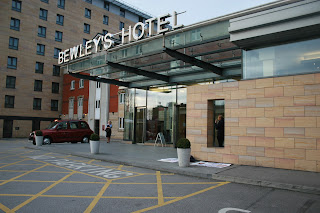 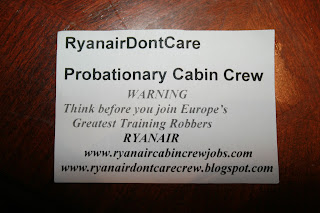 John Said up to 60% of  Students who are successful at training and are given the Ryanair/Crewlink SHAME contract will be Terminated for Profit before 12 months as they have no employment protection until the 13th month......
80 to 100 students does look like a large amount for one assessment day in November.A student came over to me and informed me that they had been waiting 3 months for this which makes me feel much better.
Thank you to all the students who talked to me today and Good Luck to all the students who attended ''RYANAIR'' Europe's Greatest Training Robbers assessment day at Manchester Airport.... Follow your Dream without being EXPLOITED.
Meassage to Mr Bonderman and Mr O'Leary, see how many do not join you after RyanairDontCare Campaign were there today.......RyanairDontCare Campaign will continue to protest and Bonderman's birthday very sooooooooooooooon...Birthday for you to remember  Mr ''Hypocrite''.
Posted by Europe's No 1 Anti Ryanair Campaigner John Foley.... at Saturday, November 19, 2011 1 comment:

DALMAC RYANAIR CABIN CREW in RUSH EXPLOIT and LIE TO RECRUIT STUDENTS in SPAIN with HELP from www.cabincrew.com

Dalmac, Ryanair's recruiters for Probationary Cabin Crew students have informed all interested students in Spain by Email
"This is our only course in Spain for 2012 - we will not be returning to Spain for a training course until 2013!!! You need to book fast if you want to do your course in Spain"

This is a Lie as all information given by Dalmac and their other scamming company Workforce International
is to exploit you and take your money.
Young students in Spain need to open their eye's, get out there on the Internet and you will see,Ryanair will SCAM you.....


John said,
This is commen practise from Dalmac and Crewlink to fill training courses taken by Europe's Greatest Training Robbers''RYANAIR'' Lie after Lie...Recruitment for Ryanair's Cabin Crew Training Courses are all year round.The more they recruit the more they TERMINATE....
Students ask yourself this, why are Ryanair still recruiting young people to become cabin crew when present cabin crew have to take months of un -paid leave.....SCAM....................training FEE......
Dalmac/Workforce are scammers tought by RYANAIR....

WARNING To Students wishing to be  PROBATIONARY RYANAIR CABIN CREW Up to 60% of you will be TERMINATED either before 6 months or before a 12 month period....All your money GONE.
Your JOB GONE.Your rented place GONE.Left all on your own by Ryanair in which ever country your based to make your own way home......PLEASE TAKE NOTE and join other airlines..
Posted by Europe's No 1 Anti Ryanair Campaigner John Foley.... at Thursday, November 17, 2011 No comments:

RYANAIR'S ABUSE ,WELCOMED BY JOHN LENNON AIRPORT AND OTHER EUROPEAN AIRPORTS FOR PROFIT..SAFETY NOT PRIORITY..BOYCOTT RYANAIR....

Hundreds if not thousands of Ryanair Uniforms are in the public place as a direct result of Exploitation of Terminated Probationary CabinCrew by RYANAIR...
The two points above,if RyanairDontCare Campaign was not a legitimate Campaign and was unscrupulous GOD HELP US.
http://ryanairdontcarecrew.blogspot.com/2011/08/john-lennon-airport-roof-top-protest.html
Posted by Europe's No 1 Anti Ryanair Campaigner John Foley.... at Wednesday, November 16, 2011 No comments: