As you will see from the article below from StJames Management who recruitment SCAM for Ryanair...
The advert is placed on cvlibrary.co.uk  which can be viwed below.
http://www.cv-library.co.uk/uk-jobs/109178394/GLASGOW/Cabin-Crew-Steward-Stewardess-Job.html

Since Ryanairdontcare Campaign was set up in 2008,Ryanair have been informing us all that StJames Management are a third party provider who conduct the Ryanair cabin crew training course..This is yet one of many lies from Ryanair's Michael O'Leary who's main aim is to recruit as many young people as Ryanair can to TERMINATE,all paying a training fee of up to 3000 euro...
The last recruitment at Stansted on 23rd May 2012  got Mr O'Leary very worried as recruitment of young people to  ''SCAM'' was hitting the lowest level ever.What Mr O'Leary did was order Eddie ''TERMINATOR'' Wilson Director Of Personnel to attend this recruitment day.Let us remember Ryanair do not recruit or train cabin crew!!!,but Eddie was there,WHY...You can see the Terminator at this recruitment day at Stansted on 23rd May here.. http://www.youtube.com/watch?v=gdyHwiWj05s

What is now very interesting is ''StJames Management'' is now an APPROVED RYANAIR RECRUITMENT PARTNER and not a cabin crew trainer as Ryanair kept saying......

As you will see from the letter below.This letter was sent by Darrell Hughes 'Deputy Director of Personnel' to the House of Commons in 2010. British MP Mr Norman Baker which clearly states under ''The factual position is as follows'' Ms Foley undertook a training course with StJames,a third party training school,in August 2008.....So Stjames Management are a recruiter of cabin crew,which Ryanairdontcare Campaign have been saying for 4 years and not a third part cabin crew training school as Ryanair say.
Yet more lies from Ryanair.Ryanair take cabin crew training courses but the fee of up to 3000 euro is paid to the third party to keep any blame away from Ryanair.Blame being TERMINATION....It is very hard for young students to see this maze which is built by Ryanair to exploit new recruited students..It is real and how is it legal???????? Young students signing the Crewlink or Workforce contract...Soon as you sign this SCAM contract you are in this exploitation maze and Ryanair will abuse you for every penny they can get...
See Darrell Hughes in Denial here... http://www.youtube.com/watch?v=ea7v5MQKXnY

''You Have Been Warned''
Once you are Terminated your career in aviation is damaged forever.Who will employ a cabin crew student who has been Terminated by Ryanair
''NONE'

Letter below off Darrell Hughes To Norman Baker MP...Click photo to enlarge... 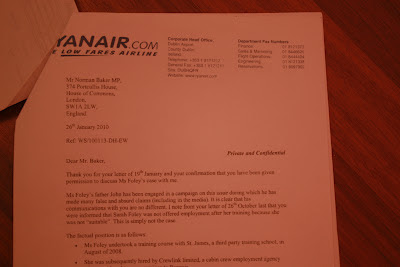 letter signed by Darrell Hughes Below. 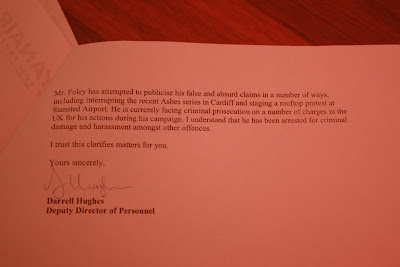 Are you bored of nine-to-five? Want something different? Want a career that will get you places? How about a job that gives you wings?

Ryanair is the World's favourite airline and operates more than 1,500 flights per day from 50 bases and 1300+ low fare routes across 27 countries, connecting 160 destinations.

Ryanair operates a fleet of 278 new Boeing 737-800 aircraft with firm orders for a further 33 new aircraft (before taking account of planned disposals), which will be delivered over the next year.

Ryanair currently has a team of more than 8,500 people and expects to carry 75 million passengers in the current fiscal year.

We are looking for enthusiastic, friendly, flexible and outgoing people to join our winning team. This is an ideal opportunity for someone who wants to begin a career in aviation or maybe you just want to try a job that's different every day!

We interview candidates at our London Stansted facility and are recruiting for positions in the UK and elsewhere in Europe.