RYANAIR CASH IN THE COCKPIT..CHARITY SCRATCH CARD SCAM.DARRELL HUGHES INVOLVED IN COVER UP. 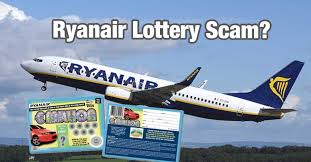 Is this money laundering by Ryanair ?

A former Ryanair pilot Mark Christensen who quit his job after being demoted for refusing to carry bag full of CASH to Ryanair's HQ in Dublin.
We at Ryanairdontcare Campaign have exposed the Ryanair Scam which involves multi €millions from sales of the Ryanair on board charity scratch card with less than 1% going to charity.
Now read the article below and see if you understand what Ryanair are up to here.We at Ryanairdontcare Campaign got told this story over the red bags full of cash in the cockpit a few years ago and posted in on this blog.Ryanair's recruitment for termination of young probationary cabin crew brings  in even more €millions.
TIME FOR A FULL INVESTIGATION INTO THESE SCAM... 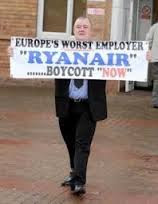 Nice to see the BBC on this blog today.Not going to post what they are looking at because someone is watching.


Mark Christensen (41) told the Employment Appeals Tribunal (EAT) today that he was left stunned when Peter Bellew, the budget airline’s former deputy director of flight operations, told him that the courier-type bags containing cash from the airline’s in-flight sales on its fleet of jets are “carried at times” on board without documentation.
This is despite strict aviation regulations requiring all bags and other cargo brought on board by airline staff be sealed and signed off on official documents, the tribunal heard.
Mr Christensen, who was a pilot with Ryanair for 17 years,  said he refused to bring the cash bags back to the airline’s Dublin hub on a flight from Manchester because he was ultimately responsible for the safety and security of the flight and its passengers and crew.
“I had no idea what the contents of the bag were. It could hold anything,” he said of the incident that occurred a week after the 13th anniversary of the 9/11 atrocity in New York City on September 18, 2014.
“In my opinion, it did pose a safety risk to the aircraft. It was an unacceptable risk,” he said, adding he was unable to access the bags for a visual inspection because they were sealed.
“To me I was just carrying out my normal duties in a prudent and responsible manner,” he said.
He described an ensuing investigation into the matter by Ryanair human resources deputy director Darrell Hughes as more of an “interrogation and ambush” which he felt was  “lopsided, unfair and impartial” in which the issue of the airline’s procedures on undocumented cargo was never addressed.
He testified that the subsequent disciplinary process in which he was demoted from the senior position of captain to first officer  – with a loss of basic pay of around €50,000 a year – as “completed unwarranted” and an “unacceptable sanction.”
He tendered his resignation in October 2014 and refused to retract it as requested by Mr Bellew, who has since gone on to the post of Chief Operations Officer for Malaysian Airlines, the tribunal heard.
“I firmly believe what I did was correct and I would still do it today,” he said.
Mr Christensen is now seeking six month’s pay in compensation from the airline, claiming he was constructively dismissed.
He is currently working as a pilot in China as a captain there but is commuting every month to be with his wife and three-year-old daughter who remain in Dublin.
Ryanair barrister Martin Heyden, SC, told the tribunal that he will produce evidence to show that there was documentation accompanying the cash bags.
The airline previously told the tribunal that7 Mr Christensen was uncooperative and that he refused to carry the bags before checking for documentation.
The hearing resumes tomorrow.

John said,
Amazing what Mark Christensen has done here.Look at what he said,
''He described an ensuing investigation into the matter by Ryanair human resources deputy director Darrell Hughes as more of an “interrogation and ambush” which he felt was  “lopsided, unfair and impartial” in which the issue of the airline’s procedures on undocumented cargo was never addressed.''

Ryanair's Darrell Hughes is a Scum Bag of the highest order and was involved in pilot pressure at Liverpool's John Lennon Airport in 2011 when Ryanair pilot Paul Ridgard committed suicide.Information below. http://ryanairdontcarecrew.blogspot.co.uk/2011/06/paul-ridgard-rip-ryanair-first.html.
Look at the video below when Ryanairdontcare Campaign confronted Scum Bag Darrell Hughes.