FIRST BILDERBERG MEMBER TO WIN THE GRAND NATIONAL.IF ONLY THE MASSES NEW..

Listen to this man "Bilderberg" Michael O'leary getting emotional talking about his children back home after his Grand National win.Do not be fooled..
If only the masses new how much this guy exploits young cabin crew at Ryanair,wrecking their young lives for profit and the way in which his on board charity scratch card Scam brings in €20 million a year with less than 1% of this money going to charity.Let us also remember the suicidal death of a Ryanair pilot in 2011 which never made the news.
This is the same guy who went to a bilderberg meeting last year.Much more about O'leary to follow in my book in 2017.
http://www.irishtimes.com/business/economy/michael-o-leary-to-attend-bilderberg-conference-1.2241597 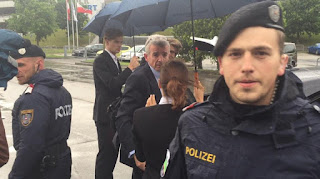 John said,
The attempted suicide and suicidal deaths of crew at Ryanair goes un challenged by the authorities and mainstream media.The exploitation and social dumping of cabin crew goes un checked by the authorities.The lose of babies of cabin crew at Ryanair brings joy to senior management..
These are not lies, much more to follow in a book I have started to write for 2017.
You can bet Ryanair will do their best to stop this book being published but rest assured this book will be published.Then you will know why never to fly Ryanair.