On 19th April 2016 the BBC2 radio show Jeremy Vine show invited Ryanair's CEO Michael O'Leary to talk on his show about Ryanair.You can listen to the interview below.
Ryanair and Circumcision.........
http://www.bbc.co.uk/programmes/b077rt4c
Jeremy Vine ask Michael O'leary questions about charging for toilets and standing passengers on board Ryanair which gave Ryanair years of publicity even though these claims where FAKE. Michael O'leary clearly lied for free publicity on these both occasions which shows you the type of CEO he is.
Ryanair management lie time and time again over all aspects of their business as we have covered in this blog.One of the lies covered last year by the Daily Mirror came from this blog,the RYANAIR Charity Scratch Card SCAM.See article below.
http://www.mirror.co.uk/news/uk-news/ryanair-plane-unfair-charity-lotto-5920749
Ryanair exploit cabin crew and pilots in a way that brings in multi £millions each month and wrecks the lives of thousands of new recruited cabin crew.In some cases crew at Ryanair have thoughts of suicide and in the case of a Ryanair pilot succeeded in killing himself in 2011 and was a news blackout.The police and coroners office did use this blog in helping to investigate Paul Ridgards death. See article below.
http://ryanairdontcarecrew.blogspot.co.uk/2011/06/paul-ridgard-rip-ryanair-first.html
We  must point out that Ryanairdontcare Campaign believe this death was not fully investigated by the coroners office and information relating to this and Ryanair management involvement will be published in our book which will be released in 2017.
Ryanair attacks anybody who tells the truth about their scams and continue to lie and use their PR tool to spin stories.
Let us go back to the Jeremy Vine show a few days ago in which Mr Vine tells Michael O'Leary that Ryanair charges cabin crew for their uniforms.
Ryanair in 2004/5 set up two shell companies Crewlink and Workforce International
to recruit,facilitate training, with a charge for cabin crew training and give out probationary cabin crew contracts to work at Ryanair.These two shell companies are involved with 4000+ Ryanair cabin crew and do charge them £360 a year for their cabin crew uniform which is deducted from their salary each month.
Ryanair's Michael O'Leary did lie to Jeremy Vine and Ryanairdontcare Campaign's founder John Foley did phone the show and was asked by the person monitoring the BBC phone for a comment to Ryanair and was then told it is to late to put me through....Lucky escape Mr O'Leary....
You can see the salary slips below from these two Ryanair shell companies and it is very clear they are charging Ryanair cabin crew for their uniform.Look at the deductions for uniforms... 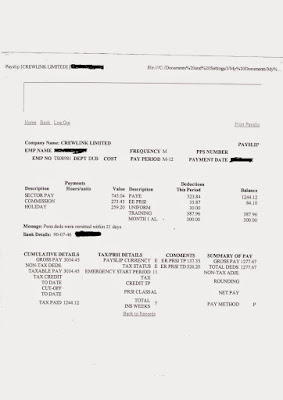 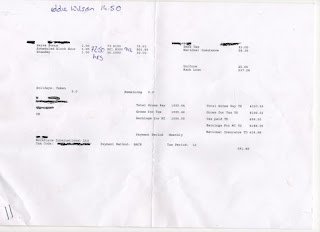 In 2013 During a debate in the House of Commons, MP Ms Berger from Liverpool raised the issue about Sophie Growcoot and accused Ryanair of exploiting its staff.Read the articles below.
http://www.telegraph.co.uk/travel/news/ryanair/Ryanair-accused-of-exploiting-staff/
and

This is what MP Ms Berger said in UK Parliament in 2013. 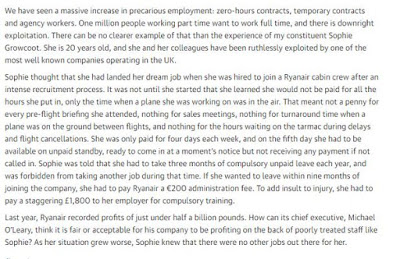 Sophie Growcoot from Liverpool did an amazing thing here exposing how bad Ryanair are and got her report mentioned in UK parliament which was targeted by the Ryanair PR team and spun.We must point out that the UK Daily Mirror did not cover this story and the Liverpool local paper Liverpool Echo did not print this story,both are owned by Trinity Mirror.
The very same day Sophie's story hit the press in the UK the Liverpool local newspaper Liverpool Echo published a PR story for Ryanair.See below.
http://www.liverpoolecho.co.uk/news/liverpool-news/merseyside-teen-qualifies-one-uks-3815223

Not a mention of this great story by Sophie Growcoot.
Ryanairdontcare Campaign did a week protest outside the Liverpool Echo's office for not telling the truth about Ryanair's exploitation of young cabin crew. 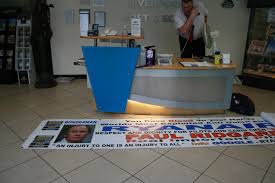 John said,
Ryanair are Europe's Largest Exploiter of Young Cabin Crew and will continue to Lie, as seen on BBC 2 Jeremy Vine show, to keep the money coming in.It amazes me how Ryanair  keep getting away with scamming so many young new recruits cabin crew and the authorities have all the information and do nothing..Money talks or keeps quite one thinks.
''BOYCOTT RYANAIR IF YOU WANT TO BE CABIN CREW"
Posted by Europe's No 1 Anti Ryanair Campaigner John Foley.... at Thursday, April 21, 2016