Anne McCrudden
Could be a bigger exploiter than Michael O'Leary 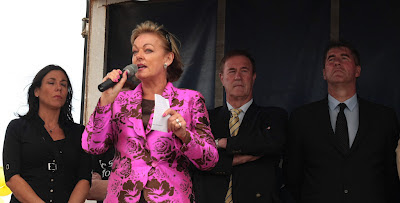 Photo above of Anne McCrudden.The lady to her left Karen McNamara confronted me at Dalmac Head Office Last Week....

Ryanairdontcare Campaign can confirm Anne McCrudden owner of Dalmac Recruitment Of Cabin Crew set up Workforce International in 2004 with Ryanair to issues contracts to probationary Ryanair cabin crew.
In the last 3 years Anne McCrudden business has a turn over of up to £100 million.The majority of these millions have been paid by Ryanair for recruitment/contracts to probationary cabin crew with up to 60% of these probationary cabin crew being terminated before a 12th month period.This recruitment for termination has not only made huge amounts of money for Ryanair but also made Anne McCrudden a very wealthy  lady.With three large premises No 12, No 14, and No 18 Main Street Rush plus at present a large building extension at the rear,gaining plenty of space to boost Ryanair recruitment for termination in the coming years.We can also confirm her involvement with St. Joseph's Secondary School Convent Lane,Rush, Co. Dublin. http://www.stjosephsrush.ie/node/161.
This exploitation has earned Ms McCrudden a position as a Director of Rush Community Council.
Dalmac Lnguage & Recruitment are members of  MEI-Reisa Ireland...http://www.mei.ie/index.php?option=com_frontpage&Itemid=1.who welcomes foreign students to Ireland to study English..Let us hope foreign students stay clear of  Dalmac Language & Recruitment..The Irish Department of Enterprise Trade and Employment need to investigate recruitment and termination at Dalmac/Workforce which costs not only 3000 euro but the reputation that Ireland wrecked their young lives..Anne McCrudden's business may have been a proud contribution to Ireland before 2004 but greed has set in, with the only contribution to Ireland now ''exploition''........
Here is Anne in 2006 Lie after Lie  http://www.irishjobs.ie/ForumWW/WWIndividualArticle.aspx?ParentID=78&CID=114&ForumTypeID=2420

John said,
Dalmac recruitment exploiters have just launched a new website...Recruitment at Dalmac has never been so low....Thanks To RYANAIRDONTCARE CAMPAIGN....
Video of a protest they try to stop in 2011 outside Dalmac head office is Rush below.
http://www.youtube.com/watch?v=07glwX5eJCY&list=UUAYCqhO5mjn4qxGOCScYVPw&index=10&feature=plcp
Posted by Europe's No 1 Anti Ryanair Campaigner John Foley.... at Wednesday, July 11, 2012